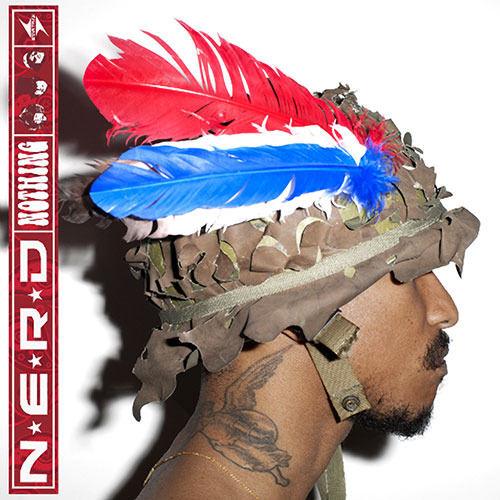 When rock/hip-hop/funk trio N.E.R.D first announced that their fourth album, Nothing, was getting pushed back a few months, tongues started wagging over the implications. Normally when albums (like films) get pushed back, it can spell disaster: the songs needed to be reworked; they can’t find their groove; the recording has been plagued with problems, etc. In the case of Nothing, N.E.R.D decided to scrap all their previous tracks and start over again (hence the album title). Luckily, their decision worked out for the best. Nothing is a well-rounded, funky, and frothy album that has Pharrell Williams, Chad Hugo, and Shay Haley dabbling in a decidedly retro bag of musical tricks.

The first singles released, “Hot -N-Fun” featuring Canadian songstress Nelly Furtado and “Hypnotize You”, aren’t entirely representative of the whole album. “Hot-N-Fun” is an accurate title for a upbeat dance track that Williams sings is “stadium music,” and one can imagine 50,000 people bouncing around. The Daft Punk-produced “Hypnotize You” is a overtly-sexual slice of slinky 80s synth R&B, saved from tackiness by Williams’ sincere falsetto.

However, the majority of the album feels like it was plucked from 70s soul/funk recordings with working class rock riffs and Motown beats. Simple drums, an ever-present horn section, finger snaps, and hand claps are the rule with most tracks, and it works. “In the Air” opens with a political statement about the American press’ blind eye and spills into a smokey, sax-backed croon session helped along by a jazzy piano. You can practically feel the itchy polyester in the retro-tinged and bongo-propelled “Perfect Defect”, which sounds like the perfect theme song to a ’70s cop show. “Help Me” borrows a page from the “roots rock” playbook, evoking a dusty, Southwestern flavor with a classic guitar riff, trumpet crescendos, and biting lyrics like “No, I won’t kill you, but I’ll watch you die.” “Victory” is one of the best songs on Nothing and the closest thing N.E.R.D has ever gotten to emulating The Beatles. The hand claps and poppy, McCartney-esque bassline take the song through an uplifting and harmonious journey where “the limit is the sky.” When Williams sings “this is my victory,” you know he’s not being facetious.

Like “Hot-N-Fun” and “Hypnotize You”, there are some more modern tracks that will appeal to N.E.R.D fans who just want to get their groove on. The booty-shaking “Sacred Temple” has Williams’ sexy whispers over a grinding bassline, building into the rollicking chorus drums, while dance-friendly “Nothing on You” harks back to classic N.E.R.D. tracks like “She Wants to Move.” The T.I. featured “Party People” opens up the album with a boisterous start, and “I Wanna Jam” brings a late 60s American hard rock feel.

Williams has stated that Nothing is about finding beauty and light in an increasingly turbulent world, a slice of positivity amongst eternal human conflict. No, Nothing isn’t completely devoid of sentiment – a lot of the lyrics are quite a contrast to the upbeat, groovy feel, showing that the group has matured somewhat over the years. In the end, it may not be all that risky or groundbreaking, but it is something, if not a new direction for N.E.R.D and one, ultimately, worth listening to.