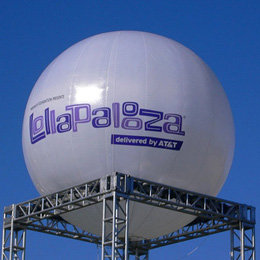 As you can see from the image above — taken from this newly launched website — Lollapalooza will soon launch its first-ever off-shoot festival in Santiago, Chile. Set to take place from April 2-3 in the Parque O’Higgins, the festival will replicate the entire structure of its Chicago counterpart, right down to the 10:00 p.m. curfew.

In an interview to announce the festival (via La Tercera, and please note I’m using Google translator so the translation may be a bit rough), Lollapalooza founder Perry Farrell explained that the festival’s expansion is another way his Chicago extravaganza is marking its 20th anniversary.

“The proposal of Chile was perfect, because, long ago, we were looking to expand internationally to celebrate our two decades. We looked at places in Europe and Africa, but there are too many festivals and we could not compete with them,” Farrell said.

After ruling the northern hemisphere, Farrell turned his attention south. “[South] America is ideal, because their audience is wonderful, because there are still many bands that have not reached that far, then it is a virgin land for festivals. As for why he chose Santiago, Farrell explained, “We had to choose one city without one big festival. In addition, the requirement was to fit the event within the city. When we visited the Parque O’Higgins we were imagining it.”

The lineup for Lollapalooza Chile won’t be unveiled until December, but Farrell says it will feature both Chilean bands as well as international acts ranging from reggae to classic rock. In a separate statement (via Chicago Tribune), Ferrell noted that some of the Chilean artists booked for the Santiago festival will also be invited to next years Chicago Lollapalooza. As for whether his own band, Jane’s Addiction, is a possibility to headline, Farrell ruled out 2011, but added, “Maybe we’ll go to Lollapalooza Chile in 2012.”

We’ll keep you updated as more information is unveiled.