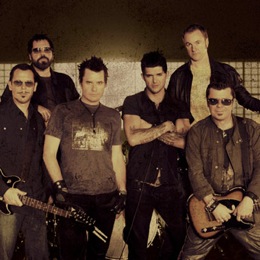 When you lose a beloved frontman like Michael Hutchence, you wonder how in the world you could ever replace him. If you’re INXS, you throw together a reality television competition. Then you fire the winner a few years later because he’s addicted to drugs. Then you invite him back. Finally, you invite a score of musicians from around the world to re-imagine the classic work of Hutchence and bring it into the 21st century. That brings us to January 11th, 2011, when INXS will release Original Sin.

The album, named for the chart-topping single off 1984’s The Swing, marks both the return of the band to their original label Atco Records, as well as their first collaboration in more than a decade with original manager CM Murphy. If those names don’t do anything for you, maybe these will: Ben Harper, Rob Thomas, John Mayer, Nikka Costa, Tricky, Train’s Pat Monahan, Cuba’s DJ Yaleidys, and French popper Loane all lend their talents to the record as they re-envision some of INXS’s greatest songs.

Harper, for one, seems overjoyed to be involved in the effort. “INXS’s songs set the table for singers. In my opinion, they’re any singer’s dream songs to sing. Covering ‘Never Tear Us Apart’ is like covering ‘Dock of the Bay.’ I’m not here to make grandiose overstatements; it’s just a fact, that is one of the greatest soul songs ever written.”

As for drummer/co-executive producer Jon Farriss, he appears to be equally enamored with the project’s reworking of his band’s classic hits. “Michael’s association with these songs was this fragile little ball we’ve all been holding. But we thought, we’ve had this great history. Why not celebrate Michael and INXS jointly – tweak out the preciousness, and have some fun?” The aim, of course, is to pay tribute to the songs themselves, celebrate INXS’s fans, and introduce a new generation to their music.

Though originally envisioned as an electronica-updating of some old tunes, the band decided to veer away from pigeonholing their new sound. While Tricky provides the initial electronic intent on “Mediate,” Thomas and Yaleidy take a sultry swing at the title track. Mayer helps out INXS guitarist Kirk Pengilly while Loane takes on vocals for “Mystify.” Initially said to have been recorded by The Killers’ Brandon Flowers, “Beautiful Girl” has been made into a ballad and passed on to Monahan. No word on if Flowers appears on a different track, but it’s worth a note that Monahan originally had “Never Tear Us Apart,” and Harper was to do “Devil Inside.” J.D. Fortune, winner of CBS’s 2005 Rock Star – INXS, is also slated to appear on the record.

We’ll be sure to let you know when a final guest and track listing is released. Until then, mark 01/11/11 down in your planner. Tip of the hat to USAToday.com, Paste Magazine, and Top40-charts.com for the story and quotes.