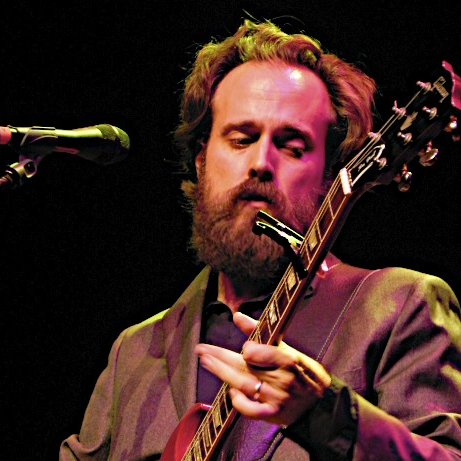 At first, I had no idea what to expect. Ive never seen Iron & Wine before, nor have I ever been to a show where theres no screaming and dancing. I wondered if it would just be Sam Beam or if there would be an entire band.

At the beginning of the show, I immediately received what I hoped for. Arriving early at Miami Beach’s Fillmore, I was able to get to the very front, right at the center of the stage, where I waited patiently until the show would start. I thought to myself how special the experience was going to be. I was able to place my hands on the cool surface, making me feel connected in a way Ive never felt.

As I was saying, what I hoped for was the quiet, enchanting music Ive come to know by Iron & Wine. As soon as Beam quietly took the stage by himself, with an acoustic guitar in tow, I knew I was going to get what I wanted. He began with an a capella and yet flawless version of “Flightless Bird American Mouth”, followed by an acoustic rendition of “Upward Over the Mountain”, which was, again, beautiful.  It didnt take long at all for me to grab my boyfriends hand and close my eyes. It sounds cheesy, but it’s true. The third song he would play alone was “The Trapeze Swinger”. Everyone seemed to be in synch with one another and all was quiet and still, give or take a few sways. Hearing Sam Beam sing, Please remember me, over and over again was heart breaking and it was just what I began to expect from this show. I thought to myself how peaceful and content I felt, but, quickly after, his band joined him on stage and a wide array of sounds filtered throughout the air.

It wasnt too different at first. They played “Peace Beneath the City” and it gave the same affect on myself and the crowd, but I immediately felt like I was losing that intimacy. Then, sure enough, the ensemble shuffled out song after song and eventually it just took me away from the state I was in. I looked at the people around me and got the feeling that I wasnt alone in this. I even heard some people asking, What is this?, to their friends and loved ones. It wasn’t too odd, that is until I started noticing the stark differences. Well into the set, I heard the beginning of what somewhat sounded like “The Sea and the Rhythm”. To get personal, I listen to this song when I need help falling asleep because its normally an incredibly soothing tune. However, I couldnt tell what I was hearing live, simply because of the added drums and distorted sounds. When he started singing, and I realized I did get the song right, I was actually deeply upset. I have nothing against the idea of altering songs for a live show, but this was a completely different song.

Basically, the remainder of the set featured songs Ive come to know that felt oddly unfamiliar to me. (With the exception of new tune “Monkeys Uptown”, off his forthcoming album, Kiss Each Other Clean.) There were so many different sounds coming from the stage that, in hindsight, it just seemed unnecessary. I wasnt sulking or complaining. I actually tried to get back into the feeling I had in the beginning. Sam Beam has this angelic voice I only associate with very few such as Jónsi and this is why I yearned for the familiar yet original, stripped-down sound. Instead, his voice just felt distant, shielded by all of the instrumentation.

In the end, I dont mean to come off as whiny. Maybe Im wrong and people around me were enjoying it more than I thought they were. Although I am making it sound like it wasnt a good experience, it was. However distant, hearing Sam Beams voice is still a treat that Im glad to have experienced.

Next time I’ll just have to catch his strictly acoustic show, apparently.

Setlist:
Flightless Bird, American Mouth
Upward Over the Mountain
The Trapeze Swinger
Peace Beneath the City
No Moon
Naked as we Came
Woman King
Morning
Carousel
Love and Some Verses
Monkeys Uptown
House by the Sea
The Sea and the Rhythm
Pagan Angel and a Borrowed Car
In My Ladys House
Summer in Savannah
Innocent Bones
——