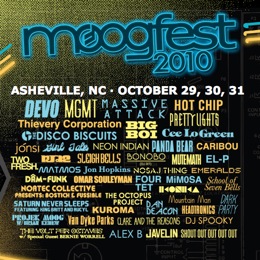 If you didn’t see – or just can’t recall – we spent some time down in Asheville, NC a couple weekends ago. We were invited to this little Halloween party. You know, nothing too big, a few legendary acts, several up and comers, and a variety of DJs. I think they called it MoogFest. Ring a bell? Okay, we thought so. Well, in addition to throwing a kick-off party and running around for coverage, Consequence of Sound also sat down with a handful of the lineup’s artists. A fairly diverse group, if we may add. Among them are Baltimore’s incredibly friendly Dan Deacon, the UK’s hottest instrumentalist Jon Hopkins, northern Mexico’s Nortec Collective, and, just above them, Austin’s own The Octopus Project.

From what we gathered, everyone felt incredibly excited to be a part of Asheville’s inaugural MoogFest. Some even felt fortunate. Now, we know artists typically say these things on any festival grounds, but this seemed a little different. Everyone, with the exception of the jet lagged Hopkins, came off as incredibly jazzed and genuinely interested to see what the festival had to offer. A few artists expressed interest in trying their hand at a couple of Moog synths themselves. For once, it felt nice to feel on par with the artist; in other words, two people both sharing the same excitement.

Unfortunately, our own host Sami Jarroush couldn’t make the trip. It’s actually incredibly unfortunate, simply because you have to watch me interview the talent. Given that I have no background in doing this, it was quite the experience – one in which I have no interest in doing again. (Hey, if you hate watching me as much as I do, I totally understand.) Regardless, here’s a chance to revisit MoogFest once more and basically learn a thing or two from each artist. If there’s anything we learned, it’s that we’ll never be as talented as The Octopus Project. Ever.