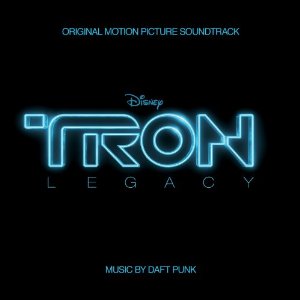 The challenge with reviewing the Tron: Legacy Soundtrack is whether or not to call it a true Daft Punk album. Sure, it’s a full album’s worth of Daft Punk music. However, the key word in the title is “soundtrack”. This highly anticipated release–researched, leaked, and teased all over the internet—is, in the end, a film score. It’s still Daft Punk’s first release in five years, desperately snatched up by their ravenous fans, but when considering its worth as stand-alone music, we must bear in mind that it was never truly meant to stand alone.

That being said, this music is… decent.

To be sure, the Tron: Legacy Soundtrack is very solid, and it even has moments of greatness. One of the main high-water marks for an album, though, is how often you’ll want to listen to it, and, to be honest, I can’t see this being in heavy rotation. The brevity of the tracks is a major issue here; many of the best pieces clock in at a scant minute and a half, leaving the listener almost more deprived than before. It stings worse, it seems, to be teased by a moment of good music than to lack it altogether.

Nevertheless, when the album is good, it is very, very good: Witness the epic downward spirals of “Fall”, the sharp sonic elbows of “Rinzler”, the popping, blurry dance beat of “Derezzed” (the video for which has already attracted significant internet buzz). Daft Punk’s orchestral compositions are nothing short of beautiful, with deep, nuanced strings playing in and out of synth beats and ambient distortion.

But when the album’s not knocking your socks off, it’s pretty forgettable. It’s got the epic sweep and dark moods that the score for a Tron movie ought to have, both in terms of paying homage to the original and fitting the current iteration, but it also sounds an awful lot like almost any other soundtrack you’ve heard recently. The most obvious of these moments comes on early track “Recognizer”, which, despite its electronic flavoring, bears a striking resemblance to a certain iconic track from Inception. This is in all likelihood simply a major, unfortunate coincidence, but it’s nonetheless hard to ignore. The soundtrack from The Dark Knight also comes to mind: orchestral, sweeping, moody, grand. All the same adjectives apply to the scores of many modern action films, and Tron: Legacy is no exception. It’s a very capable soundtrack, but it’s hardly innovative.

Other tracks are also enjoyable but ultimately don’t make much of an impression; “Adagio for TRON” and “Disc Wars” seem equally unlikely to appear at a Daft Punk concert or on a home playlist. These are solid instrumental tracks that fit the theme and mood of the film, and somebody’s high school orchestra is going to have amazing fun trying to play them at their spring concert. But as an album, though, this one doesn’t stand out significantly. The Tron: Legacy Soundtrack is quality, but it’s easy to ignore, wholly capable of disappearing into the background–which is ultimately how soundtracks are supposed to be, is it not?