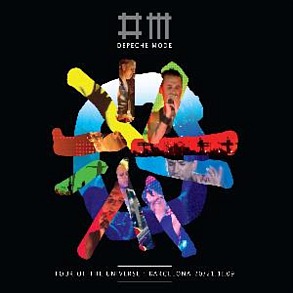 Depeche Mode’s tour in support of Sounds of the Universe was a struggle from beginning to end for the band. Dates were canceled on multiple occasions due to Dave Gahan needing surgery for a low-grade malignant tumor, tearing a calf muscle, and straining his voice. On the other hand, the tour had some definite high points, including a surprise appearance from Alan Wilder in London. In a way, Tour of the Universe: Barcelona 20/21.11.09 represents the tour as a whole, containing both the good and the bad.

Sadly, the bad is what will be immediately noticeable. The first two songs of the set, “In Chains” and “Wrong”, suffer from Gahan’s decidedly weak singing. This hurts the opening for two important reasons. First off, “In Chains” isn’t a single or overly familiar song with the audience. Therefore, it relies heavily on performance, and since it doesn’t live up to the group’s standards, it helps to sink the entire opening trilogy. Secondly, his struggling voice ruins an otherwise strong version of “Wrong”, one of the best Depeche Mode songs of the last decade. “Hole to Feed” is better, but it isn’t strong enough to make up for the previous tracks’ errors.

Once “Walking in My Shoes” kicks in, though, the show definitely improves, and Gahan starts to hit his stride. Combining a top-notch performance with the fact that the song is one of the band’s biggest hits helps to turn the concert around. From here, the audience and band are firing on all cylinders. Reinterpretations of fan favorites only add to the set. Highlights include Martin Gore’s absolutely gorgeous vocal performance on a piano-only version of “Home” and an Elvis-style adjustment of “Personal Jesus”, a ballsy move that pays off. The only snag from here on out is Gahan’s insistence on making the audience sing the chorus on “A Question of Time” and “Enjoy the Silence”. If he did this once in a while, it wouldn’t be too bad. But every single time the chorus comes up in those two songs, he passes the mic off to the crowd. It somewhat works on “Enjoy the Silence”, but the audience doesn’t even really know the chorus for “A Question of Time”.

The setlist is a mixed bag. Sounds of the Universe is relegated to only five tracks, the opening trio plus “Jezebel” and a kickass version of the Gahan-penned “Come Back”. All of the hits you’d expect to be on a Depeche Mode DVD are here and performed competently. The grungy “I Feel You” blasts through the speakers intensely. “Stripped” builds up as epically as it does on record. “Never Let Me Down Again” works as the perfect main set closer, extending itself to heights it never reaches on the studio version. The problem is that many of the songs played for the Barcelona shows have already appeared on DVD/CD. During several other tour dates, the set included “Master and Servant” and “Strangelove”, neither of which have been on a filmed release since the late ’80s.

By the time the concert wraps up with a tranquil “Waiting For The Night”, the experience as a whole is ultimately positive. If you’re not a big Depeche Mode fan, I’d give this a listen before purchasing it. If you are, then there’s a lot to enjoy here. Just expect to keep a few of the songs off of your iPod. In some cases, it’s better to stick with the studio.