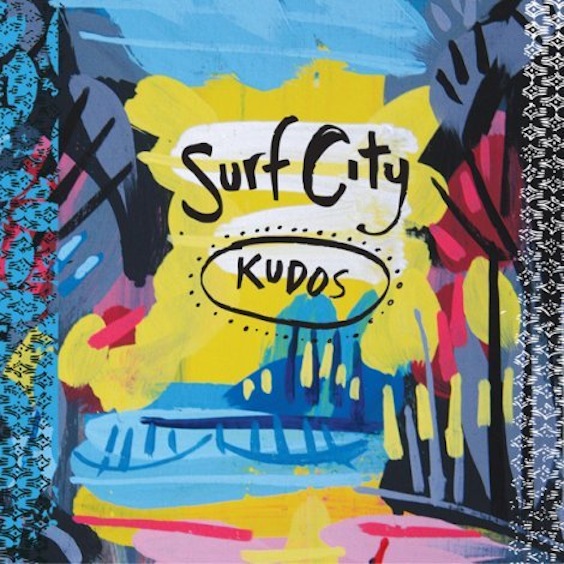 On 1963’s “Surf City”, Jan and Dean may have thought they were the pinnacle of chilled out cool. But in 1988, “Two girls for every boy” was exactly what The Jesus and Mary Chain were railing against with their anti-“women by the waves” barrage “Kill Surf City”. At present, Auckland, New Zealand’s Surf City is interested in a similar sort of mutilated revival of American Surf Rock. But instead of romanticizing it or just straight up annihilating it, they’re driving it towards the cacophonous buzz and washed out clatter of 80’s garage-y shoegaze, all whilst keeping a stronghold on the genre’s most essential qualities: soaring, catchy pop melody, thumping drums, high rising harmonies, and chugging bass. Dropping the “Kill” from their name (they were Kill Surf City at one point), with Kudos, Surf City revert back to the J&MC song’s impetus, re-imagining surf rock for the lo-fi obsessed, counter-everything world of cool we live in, without making it their goal to destroy the origins. Thus, the Jesus and Mary Chain influence remains in tact, but without the negative connotations of a murderous plot against the genre. And aside from the album using CoS Editor in Chief, Mike Roffman’s favorite accolade for its title, it’s also a fairly decent record.

Like Wavves, Surfer Blood, and numerous other throwback-infused raucous acts in recent memory, Surf City takes the melodic accessibility of Wilsonized pop and turns it on its end. Like an even more rambunctious version of fellow garage-pop Kiwis The Clean and some Flying Nun artists, Surf City isn’t merely an international replica of the aforementioned American contemporaries (though “Retro” could be a Surfer Blood song). Sure, it’s another fuzzed out trip on woodies and longboards, but it’s a welcomed addition, nonetheless.

With drumsticks counting off, the album begins inside the garage on “Crazy Rulers of the World”. A barrage of hard-hitting power chords crash against distortion heavy guitar lines struggling towards the foreground. The riff is perhaps the song’s catchiest element, soaring high above the blown out chords, shrieking harmonies, and almost inaudible lyrics. Immediately, we know this thing is gonna be detached, raucous, and smothered in noise. And for the most part, Kudos stays true to its first impressions. And yes, the loud, messy take on surf-rock can grow tiresome, but not without revealing some standouts along the way.

“See How the Sun” finds vocalist Davin Stoddard sounding more like Clap Your Hands Say Yeah frontman Alec Ounsworth  than anyone else. The song’s thumping bass and frayed lead guitar lick compete for presence over the main vocals, now more comprehensible than before.  But, they’re still so clipped that it’s hard to make any of them out.  Reverb drenched “oohs” and “ahs” linger as the track fades to silence.

While variants of these elements fill the record, it’s easily the LP’s title track that begs for the most repeated listens. An easy standout, it’s got the most to offer. As a pop song, it’s the most structurally thought out, the most concise (at 3:09, it’s the shortest on the record), and just the downright catchiest. “West coast dreams are kept alive by the hidden sunsets in lies,” Stoddard spews with a drawn out hiccup on the “alive” and “lies” sounding like a more Beach Boys inclined Stephen Malkmus over the relative tranquility of a crunchy guitar line. Then come the Mike Love inspired “oohs,” the Clean-esque distortion, and the pounding drums, in perfect time to kick things up. It’s a shame, though, because none of the songs that follow really come close to this peak.

The lengthy “Icy Lakes” is a little excessive. It grows monotonous with pretty infrequent variation, a guitar line and a mimicking vocal melody dominating the track’s seven minutes. Here, Stoddard sounds like some strange amalgamation of Stone Roses frontman Ian Brown and the aforementioned Ounsworth. While the track’s noise and surfy bass initially draw us in, it simply lasts too long.

And I guess that’s kind of the issue with this record. A lot of these songs sound great alone, but side by side, the thing becomes a lot of the same. The steady drum beats, the noisy riffs, the lackadaisical yelps, they all kind of mesh together. Plus, the majority of the tracks are simply overshadowed by the perfection achieved on the set’s title track, but only because they strive for the exact same effect and clearly fall short.

It’s the tracks that add in new elements, however, that make the record somewhat worthwhile. Instead of working towards the same result found on “Kudos”, the beat gets switched up, to a surprising result. “Yazuka Park”, for example, begins like it could be an Animal Collective song, with delayed electronic blips curling around thumping bass drums. It’s the first track that isn’t so bombastic, and also the first that introduces any out-of-the-ordinary rock instrumentation. With nearly incomprehensible lead vocals swashing around the background, it’s a slow rolling, head bobber that plays out like what would happen if Slowdive spent a week surfing before they brainstormed material for a new album. Zombies also recalls the Animal Collective, reminiscent of Panda Bear’s tribal inspired thumps, the wordless cooing that sparks “Fireworks”, and the Tare-ific yelps that burst forth from “Grass”. It’s another standout, because of its differentiation. But these  novel sounds are far and few in between.  If more dissimilarity populated Kudos, it’d flow better, the harder songs would hit harder, and it wouldn’t all mumble together.

But all in all, Kudos could do with some editing. For a carefree, slacker record, it really needn’t be so long. It should begin as it does, fuck around with some distortion in the garage, and then skate away towards the beach, surfboard in hand. It’s got a lot of great elements, but composed mostly of short songs, they pile up and get a little dull as they accumulate.  As Surf City’s debut, however, Kudos shows a lot of potential.  Songs like “Yazuka Park” reveal that they’re capable of  switching things up. They just need to balance it out, instead of riding steadily on the same distortion-heavy waves.