The Black Eyed Peas – The Beginning 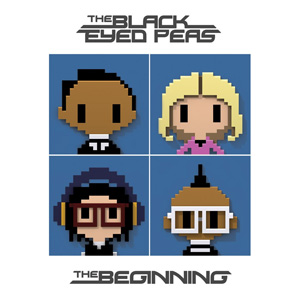 It’s safe to say that The Black Eyed Peas know exactly what they’re doing and are not trying to hide it. If you believed that their new release, The Beginning, would be a return to their original sound (which has been lost since the highly underrated and unheard Behind the Front), you’re a damn fool. BEP have no intention of solidifying themselves in the hip hop community; Maybe in some respects they already have. For this group, it may not be about the music, money, or fame anymore. Upon hearing this album, it’s clear that they’re only out to do one thing: throw the biggest fucking party anyone has ever seen.

On the first track and lead single, “The Time (Dirty Bit)”, we relive a classic Dirty Dancing moment. The song that makes women (and men?) cry upon hearing it, is the first sound we are baited with, as the Peas boast the unforgettable lyrics: “I had the time of my life, and I never felt this way before.” You know the rest. If you believed you would be receiving a total cover of the timeless classic, you’re fooling yourself. It turns into a fast-paced, let your hair down, throw your clothes off, club banger. Is it fun? Sure. But you have to wonder if the creators of Dirty Dancing are okay with what has become of their tune.

BEP use clever samples throughout the disc. “Light Up the Night” uses the ever-popular Slick Rick cut “Children’s Story”. “Love You Long Time” features “Give It Up” by KC & The Sunshine Band. The production on this album is nothing short of brilliant. Whether will.i.am is creating his own beats or borrowing from someone else, if he has not already proven himself as a top producer in the industry, this should cement his name. Lyrically, The Beginning is nothing special, but for those who appreciate finely tuned production, there is no disappointment here.

With the level of precision that went into the beats and music, it shows that the lyrics took a back seat. That isn’t to say that Fergie doesn’t shine in her moments; She stretches her vocals throughout the album, with a few clever rhymes peppered in. The fact is, inspiring songs from the Peas’ earlier catalog, such as “Where is the Love”, have been lost. The lone exceptions to this would be “Whenever”, as well as the bonus tracks “Phenomenon” and “Own It”, which includes the lyric: “Keep on reaching for your dreams cuz it ain’t crazy as it seems.” The album is more about staying out late, dancing, and partying. In reality, they could have done away with the lyrics altogether and just released an instrumental album of beats and get a similar result.

Although the overall plot of the album is sparse, it’s hard to deny the enjoyment it can bring to you. If you know what to expect when you hear it, you can take The Beginning for what it is: a feel good album. It is in no way anything to dissect or to look for hidden meanings in. Sometimes you just need to let loose and enjoy the beat. The Black Eyed Peas just gave you a Saturday night plan, so go have some fun.