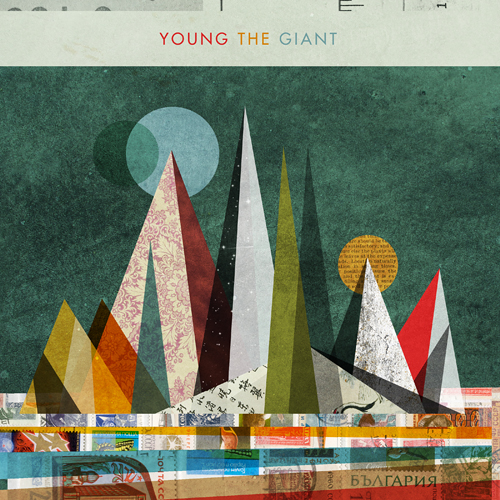 What’s in a name? In a world where The Tallest Man on Earth is hardly 5‘8’’, Caribou isn’t an animal, and Wavves is spelled with two v’s, it’s a legitimate question. Young the Giant, although a strange title, could not be a more accurate one. The California quintet boasts an average age of 21 and will, without a doubt, become giants when the world gets ahold of their self-titled debut. Seriously, it’s that good. Catching attention on a long-winded national touring spree, opening for Minus the Bear, Steel Train, The Futureheads, and Neon Trees on various tours over the past 18 months, their music, as perfectly described by vocalist Sameer Gadhia, is “eternal summer.” Infectious melodies, soaring vocals, ceaseless enthusiasm and vibrancy take us to the beach, to summer love, and to simpler, happier times.

Young the Giant kicks off with mid-tempo “Apartment”, a seemingly average track that quickly crescendos into an impressive showcase of Gadhia’s vocal range. Inevitably seducing us with toe-tapping tambourine, groovy bass lines, and even some lyrical teasing (“so sure to keep you dreamin’”), it sets the stage perfectly for the very sensual “My Body”. With a danceable, building beat and an explosive anthem of a chorus, it’s truly difficult not to put this song on repeat, sing along, and forgo listening to the rest of the album. The review must go on, though.

Taking into account the addictive quality of Young the Giant’s brand of rich, poppy rock, one could reasonably expect catchy songs without substance, a collection of singles to spend sunny days driving with. They successfully avoid this trap; the album is just that– an album. One boasting consistent catchiness while also incorporating a delectable combination of continuity, depth, and progression. Trying to avoid monotony while remaining stylistically coherent can be a tough task, but not for Young the Giant. They toy with stringed orchestration, intricate guitar runs, and the occasional building percussion while vocally featuring solo, heartfelt pipes, sweet harmonies, and the rare, raucous, fun shouted choruses. This complete command over their craft really sets these Orange County natives apart, resulting in the kind of record that grabs you at first listen and becomes more meaningful every time through.

Departing from the expected upbeat, optimistic tracks that characterize the beginning of the album, “Cough Syrup”, the favorite of the local radio stations from Young the Giant’s first EP (released under the moniker The Jakes), perfectly epitomizes the variety. Mellow guitar and cello contrast the sunny preceding tracks, the lyrics contemplate apathy and misdirection, and yet the chorus is still so compelling that you find yourself humming it hours later. “God Made Man” offers a slow start that eventually swells into a triumphant, emotional conclusion. You can feel the sincerity in the repetitions of “‘Cause I want you to know, that I know”, making a plea for straightforward communication.

The album then returns to absolute beach bliss, with “12 Fingers” and its irresistible wall of guitars and sweet harmonies and easy-breezy “Strings” and “Your Side”. These songs all tout the nostalgia of careless summer love, a theme warmly welcomed this time of year. Following this is “Garands”, one of the album’s strongest tracks, which lyrically paints a picture of love and its place in the world, mesmerizing us with its lush guitars and harmonies. Delicate “Islands” launches into the grand finale, with soaring vocals layered over subtle instrumentation, begging his lover to “Tell me we are going somewhere, where the stars meet the sky,” the perfect summation of the album and where it takes us as listeners.

“A dark world aches for a splash of the sun, oh, oh” loftily sings Gadhia on “Cough Syrup”. Young the Giant is just that and more in the midst of these winter months.