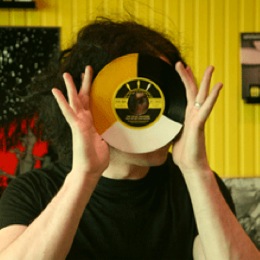 If your memory dates back to October, then you may remember The White Stripes’ single that fetched $18k in an eBay auction. Jack White certainly does, as The White Stripes/Racontuers/Dead Weather figurehead recently began having his label, Third Man Records, list limited edition releases on the online auction website. This, not surprisingly, has been met with a bit of criticism.

In a recent chat (via The Guardian) with subscribers of Third Man’s paid member service, The Vault, White explained that his decision to list releases on eBay was only an attempt to beat “flippers” at their own game. Oh, and to make a bit more dinero, too.

“We sell a Wanda Jackson split record for $10 bucks, the eBay flipper turns around and sells it for $300,” White explained. “If $300 is what it’s worth, then why doesn’t Third Man Records sell it for $300? If we sell them for more, the artist gets more, the flipper gets nothing … We thought we’d let you decide how much they cost this time.”

A sensible explanation for some, but those participating in the chat didn’t necessarily buy the argument. In fact, they even began accusing White of exploiting his fans (with some expletives worked in for good measure), which, well, caused the musician to go on a bit of, uh, Kanye rant…

“You would go so far as to say fuck you to us?” White wrote. “For what? We didn’t do anything to you but give you what you want … If you don’t want [this record], DON’T BUY IT. And if you do want it, don’t act like you DON’T want it. Get in line like anyone else … It’s you and others wanting them that dictates the price and the entire nature of the idea.”

He continued: “There’s a guy who waits in a black SUV down the block from Third Man who hires homeless people to go buy him tri-colour [records] when they are on sale… You act like we bury [vinyl] in tunnels in Vietnam for God sakes… Don’t be spoiled, don’t insult people who are trying to give you what you want … Seriously stop all of the whining, because what you communicate to us is that all of the trouble we go to isn’t worth it because nothing we do will make you happy.”

With that in mind, now’s probably a good time to remind you that reissues of The White Stripes’ self-titled debut can now be purchased via Third Man’s Records online store, with similar re-releases for De Stijl and White Blood Cells to follow on December 7th and 14th, respectively. You also don’t need an eBay account — at least not yet — in order to pick up The White Stripes’ special holiday gift package.

And for those who’d like to read White’s recent chat conversation in full, you can do so on Antiquiet.