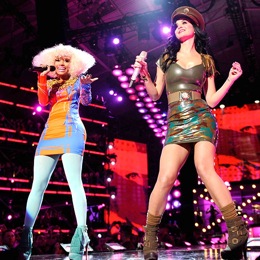 Now that it’s Christmastime, it’s time to start thinking about people who aren’t ourselves. If you’re clueless as where to begin, there’s no one who isn’t you that deserves more attention than our brave men and women in the armed services. While some folks choose to send care packages or volunteer in VA hospitals, VH1 had a better idea with their VH1 Divas Salute the Troops, where numerous divas, including Keri Hilson and Grace Potter & the Nocturnals,  gave thanks in musical form to those who sacrifice themselves for our freedom. The most memorable of those performances was a duet between Nicki Minaj and Katy Perry on Cyndi Lauper‘s November 1983 hit “Girls Just Wanna Have Fun”. Check out the clip above and ask yourself the following: are awful cover songs, tacky choreography, and clown wigs really something we want our vets to be exposed to?