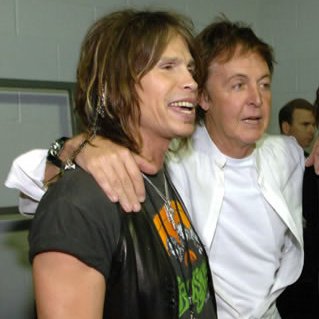 As a musical deity, Paul McCartney has been honored dozens and dozens of times for his additions to the music canon, both as the most adorable member of The Beatles and for his contribution with Wings. In fact, in the last few months alone, he’s had “Hey Jude” covered by a cornucopia of artists and has been the source of a great cover of “Mother Nature’s Son” by Jack White. Plus, Glee might be all over The Beatles back catalog one of these days. But in one of the more interesting odes, Aersomith frontman/American Idol judge Steven Tyler will honor Macca by covering the last four songs of Abbey Road when the former Beatle is honored during the 33rd annual Kennedy Center Honors in Washington, DC on December 5th. He’s not worthy! He’s not worthy!

Oh, and if you’re wondering, it was all McCartney’s idea. During an interview with 95.9 WATD last week, Tyler explained that he was “called up by McCartney and he asked me to sing the last four songs of Abbey Road, so i said ‘umm ok,’ doing it. So I’m headed down to the Kennedy honors in Washington.” To save you the Google search, those songs are “Golden Slumbers”, “Carry That Weight”, “The End”, and “Her Majesty”.

Can’t make it to the festivities? PBS CBS will air the two-hour special on December 28th at 9 p.m. ET/PT.

Also, if there’s going to be a little “you scratch my back, I’ll scratch yours” action going on, Sir Paul, may we suggest “Love in an Elevator” as your song of choice?