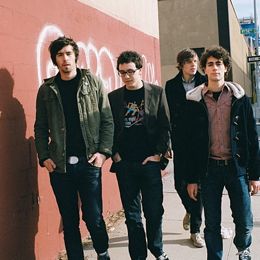 We’re starting to think that Tokyo Police Club are feeling the swagger. The same day that BSB and NKOTB announced their mega gigantic co-headlining tour, those young Canadians announced a similar outing with Two Door Cinema Club (similar as in they both feature a trip on a bus to venues across the country.) Then, a few weeks later, NKOTBSB announced even more dates. So, arguably to give the indie girls just as much reason to scream in ecstasy, TPC have announced more shows in the U.S. and Canada throughout winter 2011.

The dates with Two Door Cinema Club will take place between January 17th and January 27th, where they’ll play throughout the East Coast and into the South and Florida, ending in Orlando, FL. Before that group of gigs, though, TPC will play several shows, including stops in Portland, OR and Colorado Springs, CO, starting on December 4th. After their co-headlining duties, the boys will head west into Texas and then back into the South and Mid-South, calling it a day (at least for now) on February 10th in Covington, KY.

Check out the entire itinerary below. As always, stay tuned for more dates and news as they’re announced. Oh, and NKOTBSB, you’ve been warned.