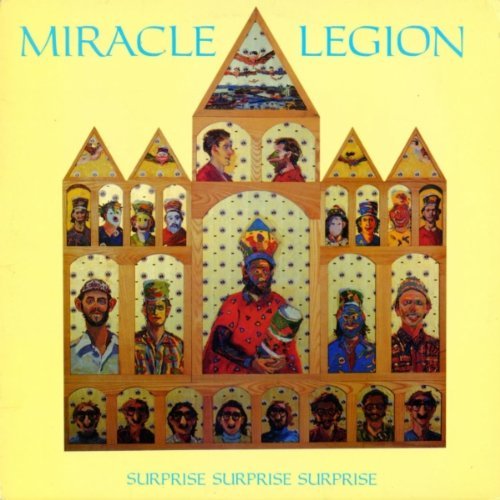 One of the major surprises of the 2010 holiday season was the remastered, digital release of Miracle Legion’s 1987 full-length debut, Surprise Surprise Surprise. Despite the buzz created by comparisons to early R.E.M. and rising popularity on ‘80s college radio, the now-defunct band never managed to become a household name. However, through lead singer Mark Mulcahy’s acclaimed solo work and modern-day time capsules like YouTube, the band has managed to maintain a loyal legion of fans, and growing numbers of listeners continue to serendipitously stumble upon Miracle Legion’s music online and get transported 20 years back to a song, record, or show that they once loved but had perhaps put out of mind.

Surprise Surprise Surprise is an album of many charms, but what stands out most is how comfortable and at home the band is in their sound for a debut record. Listen to opener “Mr. Mingo” and you already hear the essence of Miracle Legion—a sound that would evolve on future records like Me and Mr. Ray and Drenched. Dreamlike pop and folk meet alt-country and crystallize in such a natural and effortless way. Ray Neal’s guitars and the beat are warm and steady, never running rampant but not meandering either. Mulcahy’s gorgeous vocals, neither on top of you nor buried, range from plaintive and wistful to soaring and echoing, delivering passive lines like “It’s not important to me now/At least that’s what I tell myself when I am feeling down/I’m not in love enough to stay/But I’m in love enough to know that I should go away.”

“All for the Best” (recently covered by Radiohead’s Thom Yorke) follows in similar vibrant fashion. Like on earlier single “The Backyard”, Mulcahy draws on nostalgic, youthful imagery like made beds, cutting grass, and porches to describe a time and relationship. The track culminates in a hazy swirl of vocal parts, with the continual pleading of “Say you love me” resolved by the telling closing line, “Let’s just say you love me.”

Bright arrangements on the opening tracks somewhat mask the fact that melancholy hangs over so much of this album. A ubiquitous, palpable yearning is often met head-on by moments of resignation and paralysis. “If I could, I would change my spots,” sings Mulcahy on the glowing “Truly”, arguably the record’s finest track. His playful lyrical twists perfectly convey that moment when you truly know that something won’t work out, despite all the wishing in the world. “I’ve imagined it a hundred times because/I’m not frightened, but I wish I was.”

Much of the back half of Surprise Surprise Surprise takes on a decidedly harder edge and a more ominous and brooding tone to match Mulcahy’s bleaker musings. The fragmented “Storyteller” teeters on edge, Mulcahy sounding paranoid and desperate in defense of a troubled girl from the past. “Country Boy” haunts with its biting interplay between driving guitars and harmonica and once again features childhood imagery—the girl next door, a dollhouse, and haunted houses—only now any nostalgia or innocence seems to be abandoned and replaced by a sense of things having gone wrong. “But that was way back when all the kisses were lined up in a row, row, row/Where are they now?/Well, how should I know?”

The spare, acoustic “Little Man” closes the record on a somber note. “I wear your clothes, but they don’t fit me,” sings Mulcahy, his voice sounding like it’s bouncing off the walls of a cramped cellar, “and I’m trying to be what I should be.” This line sums up so many of the record’s protagonists. Defeated and misguided as they often seem (or even admit to being), there is tireless longing in them—the indomitable Bellowesque “I want, I want, I want”—and no willingness to throw in the towel.

The singing and inventive harmonies are breathtaking throughout on Surprise Surprise Surprise, and the playing is full of life without relying upon infectious hooks or overly memorable choruses. This record is a resonating statement of frustrated youth told in the language of understatement. Its emotional weight is deceptive in that there are no knockout punches thrown; rather, the album is a series of landed jabs that accumulate and take their toll on the listener.

For many, listening to Surprise Surprise Surprise will be like bumping into a really good old friend who hasn’t been heard from in years. For newcomers, it will be an introduction to a gifted singer and a unique sound that still holds up more than two decades later. Whichever category you might fall under, don’t be surprised if this record from long ago turns into one of your 2011 favorites.

Surprise Surprise Surprise is available in digital formats (everywhere) and on vinyl at www.mezzotint.com. “Will You Wait”, a bonus track not on the vinyl version, is included as part of the digital release.