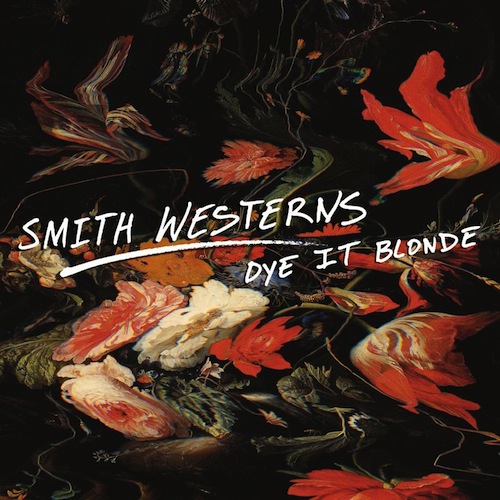 In my review of their self-titled debut LP, I said that the Smith Westerns were the poster boys of the blogosphere and its relationship to buzz bands because they realized they “can’t escape the paradigm and do their best to make good music within it.” For their sophomore LP, Dye It Blonde, the foursome continue the same pattern of behavior, taking a step out of the garage, doing their best to give up the fuzz and feedback, and aiming at making a record steeped in the sounds of Britpop. The resulting effort is one that dropkicks the paradigm in the face despite a few missteps.

There’s no denying that ‘60s music has been a huge draw for new acts looking to explore the soundscape of popular music. From the surf rock revival of 2010 to acts from Girls to Someone Still Loves You Boris Yeltsin adding a sheen of poppy abandonment, the indie music world has a wicked case of  sonic nostalgia. Unlike other acts, though, Smith Westerns’ best work comes when they don’t allow themselves to get too caught up in the history and traditions of the sounds of old.

Album opener/lead single “Weekend” is full of the things we love about the band (in particular the fuzzy, jangly guitar) but dressed up with a newfound sense of production. Regardless of the sound, though, the band still hits at what makes them so irresistible: that boyish, often immature sense of forlornness we’re all familiar with, done in a way that is light and breezy. “Imagine Pt. 3” accomplishes the same kind of feat; with a Wings-ian feel to it, plus more fuzzy guitars and lush synth noises, that sadness continues to take on an almost satirical lean (“The look in your eyes/makes me wanna die/you’re not the girl I used to know”). Coupled with “All Die Young”, with its dramatic organ intro and gentle wailing sound, courtesy of a slide guitar that eventually melts into a barrage of noises both new and old, these tracks tell a story of a band with a sense of humor and a distinct dedication to genuine emotional displays. They’re four young guys playing around with chunks and pieces of everything they’ve been exposed to their whole lives, making a pastiche of things without settling on one — while still sounding as if they have. They’ve cleaned up their music with loads of sugar sweet space for tunes to grow in and made the newer, grimier aspects of their music all that more powerful.

While these tracks do their best to be hybrids of their debut’s sound and a newfound love of Suede, T. Rex, and beyond, there’s enough tracks on this LP that fall victim to overindulgence to potentially be a worry come future releases. The album’s final three tracks (“Smile”, “Dance Away”, and “Dye The World”) each reflect a loss of their distinct worldview. “Smile”, in particular, is too bubbly and overjoyed to feel like it actually came from Smith Westerns. Musically, it’s far too grandiose and sweeping, showing that the bigger, more robust sound can still slip through the boys’ fingers. “Dye The World” seems to suffer from a distinct case of John Lennon lyricism, in that rather than actual depth being offered up, the concept of “dyeing the world” is meant to stand in as some construct of great social importance and meaning. These three tracks are somewhat of a blessing and a curse. Yes, they’re clearly inferior to the remaining tracks on the record, but they also help to demonstrate the band isn’t above going all out in the eternal search for something new and exciting to offer up to fans.

When you’ve been given a lot in life, there’s little you can do to change it. Doing their best to make the most out of a situation and other people’s preconceived notions and arbitrarily established boundaries, the boys of Smith Westerns made their Britpop magnum opus, for better or for worse. Here’s to the next cut and color they choose.