The Decemberists Step Out of Their Comfort Zone on The King Is Dead: Review

Colin Meloy and co. return with a stripped-down, country-tinged meditation on loss and nature 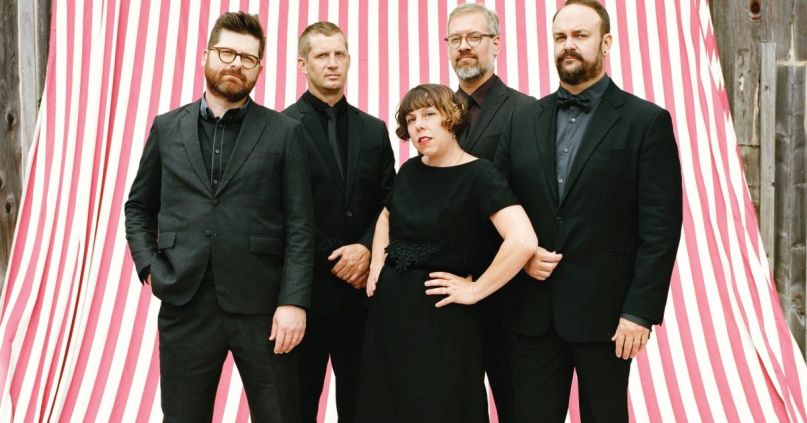 Editor’s Note: As The King Is Dead turns 10, we take a look back at Daniel Caffrey’s classic review.

The Decemberists’ 2009 rock opera, The Hazards of Love, pushed frontman Colin Meloy’s verbose storytelling to its peak, a complex, sylvan fanta-tragedy that polarized fans, causing many to hail it as a conceptual masterpiece and others to disown it as bloated RPG-inspired tripe. Despite the differing opinions, everyone wondered where Portland’s antiquated yarn-spinners would go next. Getting more epic would be damn near impossible, and returning to a lighter album of whimsically twisted potboilers would be backpedaling. Change seemed to be the most logical option, and while The King Is Dead isn’t exactly a reinvention, it’s more streamlined than any of the band’s previous releases, a stripped-down, country-tinged meditation on loss and nature.

From the opening harmonica bluster of “Don’t Carry It All” to the record’s pastoral recording location to the album cover of looming black pines, The King Is Dead is thematically nestled in the backwoods. Gone are the band’s tavern orchestra instrumentation and elaborate Gorey-esque tales. Jenny Conlee’s accordion, while still present, is turned down in favor of Chris Funk’s slide guitar, and Meloy’s once vulturous narratives are turned inward for lyrically vague, but effective self-examinations. Confessions like “Calamity Song”, “Rox in the Box”, and “Down by the Water” feature unnamed narrators dealing with guilty consciences amidst tumultuous country environments, as if their mistakes were directly responsible for the destructive acts of nature around them. “The season rubs me wrong/ The summer swells anon/ So, knock me down, tear me up/ But I would bear it all just to fill my cup,” Meloy sings. Unlike his previous stories such as “The Bagman’s Gambit”, “The Bachelor and the Bride”, and “O! Valencia”, we never discover what leads these characters to their ominous fates, giving the album a sense of rustic melancholia.

This doesn’t necessarily mean it’s a weeper. Because of the lack of literal details, the songs don’t have the heart-wrenching dramatic weight of The Hazards of Love (which occasionally went overboard with the fantasy melodrama), and there are sunny spots speckled throughout. The saloon piano and honky-tonk fiddle of “All Arise!” give the song a breezy barroom bounce, and “June Hymn” chronicles the changing of seasons with some of Meloy’s most gorgeously vivid imagery to date. Lucid phrases like “A barany of ivy in the trees, expanding out its empire by degrees/ And all the branches burst a’ bloom into bloom/ Heaven sent this cardinal, maroon to decorate our living room” mark his maturity as a wordsmith, using lush visuals instead of his usual narrative crutch to evoke a mood rather than a linear storyline. The balance of scenery and sins as well as some jangly guitar work from R.E.M.’s Peter Buck and the glassy background pipes of Gillian Welch render The King Is Dead a pleasant, introspective stroll through the cottonwoods whose creaky comfort gets The Decemberists out of their comfort zone.

Pick up a copy of The King Is Dead here…

The King Is Dead Artwork