The Dismemberment Plan – Emergency & I [Reissue] 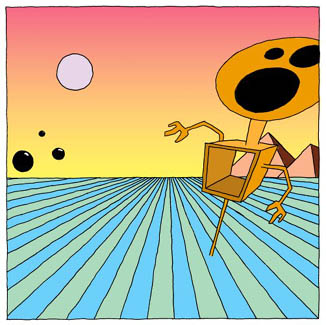 And the album begins without warning, without an intro, unlike so many albums. “A Life of Possibilities” sudden inertia introduces an album about the unraveling of our lives, overwhelming paradoxes, neuroses wrapped in the mundane nestled in apocalyptic ramifications, old fashioned heartache, over-stimulation (read: “issues”). Yeah, I was cut from the fabric of this album, same as every reviewer who’s been aching to write about this album since its release. The reissuing of Emergency & I is a good chance to (re)discover the The Dismemberment Plan and how affecting these 12 tracks are — as I have been for the past week in prepping for this review.

Check that. It’s not a review, really. There’s no new music besides some B-sides (more later), so it’s just a reissue. And a reissuing of an album is either a cash grab or a necessity, often both. It’s hard to say truthfully what The D-Plan’s move is here. Hell, just try to name a band from the 90’s that hasn’t reunited in the last couple of years to play some shows and relight their fires in the face of the 21st century (there’s nothing more geriatric than a band from the 90’s announcing their new “Twitter feed” and “Facebook page”). The music business traffics in nostalgia, so what better way to feel warm and fuzzy then to revisit some of the music that first opened your eyes to worlds unseen. The Disrememberment Plan.

After 12 years on shelves, in CD cases, hard drives, Emergency & I, now in a wonderful vinyl package with copious liner notes and lyric sheets, owes the bulk of its staying power to its production. J. Robbins and Chad Clark did something special to these four guys here. Much like Godrich’s touch on the rather untouchable Ok Computer, there’s an unnameable presence that traces each song from beginning to end allowing the quartet to function as an ensemble. It’s like the movie Network — everyone in it is just incredible. Each band member could have an eponymous ”esque” attached to their names by the end of it. Even as the first track looses its din (to borrow its parlance), we already sense Morrison’s paralysis and detachment, guitarist Jason Caddell’s knack for a guitar riff filled with whimsy and prowess, Joe Easley’s technically precise and fascinating kit work (though this song really is the tip of the iceberg for Easley), and a star bass player with a voice equal to that of everyone else, thanks to Eric Alexson.

So rarely is the musicianship on an album an overlying theme, and so rarely does an album with a proggy influence and a potpourri of time signatures (“Gyroscope” is in 15/16, for those -philes out there who try to count it) remain, well, relevant. It doesn’t even sound like a memory play or a frame story, but rather the apotheosis of a band, a genre, and an album that few artists can say they’ve eclipsed. In 1999 , Emergency & I functioned as one of the death knells of emo and the progenitors of dance-punk. Today, it holds court as unique fixture of music in the 90s that sounds timeless. That’s not to say the 90’s aren’t abounding on the record.

Morrison’s voice and lyrics takes one if not several pages from Steve Malkmus of Pavement. His stuttering freakouts on “Girl O’ Clock” sound easily like a Wowie Zowie B-side. When he intones “the trash goes out on a Tuesday now/you gotta make a note about that,” the lackadaisical slacker vibe comes to the forefront. But that’s too reductive to categorize Morrison as a Malkmus acolyte, because where Malkmus feared the “single”, Morrison shot for it several times on this record. “What Do You Want Me To Say” has a fun simplicity to it evidence by the single guitar note played for the majority of the song. “The City” laments that your romantic emptiness and numbness can make an entire city feel just as alone, which is a mood I’ve identified with too many times to really want to feel anymore. (Thanks a lot, guys!) But the singular best single is “You Are Invited”.

Whole lectures could be written about this song’s power, but on Emergency & I, the song is a unique counterpoint to much of straight up DC post-punk sound. Right after the explosive cacophony of “I Love A Magician” ends, a simple Casio beat begins and Morrison tells a story of a vague VIP invite that says simply, “You are invited/by anyone to do anything/you are invited/for all time.” In an album full of wallowing in melancholy, this one semblance of extroversion and selflessness is goddamn touching, and stands for me as the highlight of the album.

When Morrison isn’t aching for airplay, he’s creating dynamic wars between below-zero ballads like “The Jitters” and shock-therapy entr’actes like “Memory Machine”, the latter of which anticipates a mechanical soma to make us forget about the bad times. The vinyl reissue includes four bonus tracks which serves as a nice little expansion set. No new revelations are offered, but it strengthens the world that Emergency & I built, especially with genre-spanning Side 4 closer “The First Anniversary of Your Last Phone Call.”

The Plan colors this record with 12 songs that serve as hitching posts for whatever ails you. Life medicine never sounded better. But more than a personal and cheap therapist, Emergency & I continues to arch its influence even after a 12-year gap. And in these last weeks, I’ve noticed the ubiquity of this album in music, in behavior, fuck, in the world. Maybe it’s the introspection the album forces upon you, but on my headphones around the city, everything becomes colored and shaped like surrealist cover art. And soon enough, I realize it’s not just me who’s cut from the fabric of the album — who and what isn’t cut from this album?