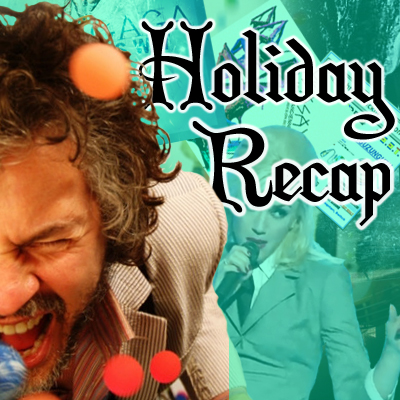 Around here, there’s never an off day, especially with the presence of Twitter, Kanye West, Lady Gaga, M.I.A., Damon Albarn, and a whole slew of others. So while you were busy opening gifts, returning said gifts, and toasting to the turn of the decade, we were doing all of it with our eyes glued to our laptops and iPhone screens. And while our loved ones may have been perplexed by our seemingly untreatable addiction to keeping up with every bit of breaking news, they’ll never understand that our greatest gift is being able to keep you — our loyal readers — completely up to date on everything that relates to the music that we all love so much.

The best part about a lot of the news that happened over the “break” was that much of it involved artists giving things away for free. M.I.A, jj, Rick Ross, Yeasayer, Klaxons, and Gorillaz all released the fruits of their labor gratis before Radiohead, Trent Reznor, and Muse handed out videos to keep your eyes as stimulated as your ears. To cap it all off, Kanye West — our top artist of 2010 — ended his Twitter hibernation with a slew of delightfully manic Yeezy-tweets that culminated in his New Year’s Eve performance with Jay-Z and Coldplay. Throw in news about Lady Gaga’s new album and fresh tracks from Dr. Dre, Eminem, Beady Eye, Lupe Fiasco, and Bright Eyes, and what you’ve got is proof that 2010 marked the year that we stopped getting days off.

So without further adieu, here are the the biggest stories that you may have missed all rolled into one quick read.  And yes, we did include the “Usher Plagiarizes Homer Simpson” story, too. Happy New Year!