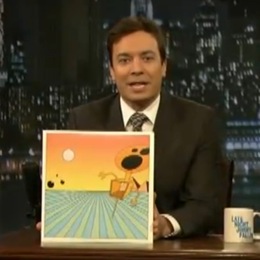 Late night TV became infinitely better when Jimmy Fallon replaced Conan. He might not be a better on-air talent (though some here at CoS would beg to disagree), but J-Fal was the first to make an astonishing discovery: the 18-25 demographic could give two shits about Bon Jovi. Sure, Dave has a love affair with Ryan Adams and Coco is all BFF with Jack White, but Fallon was the first late night talker to exploit the lack of indie after 11:35pm. His efforts have since paid off, as the latest edition of “Holy Shit, he brought who?” featured reunited rockers The Dismemberment Plan in what was their first performance since 2007. The Washington, DC-based outfit kicked off their forthcoming reunion tour with performances of Emergency & I‘s “The City” and “What Do You Want Me to Say”. Watch the former above and the web-exclusive latter below; Fallon’s giddiness was warranted.

Has J-Fal’s booker led competing programs to raise their game? Well, if last night was any indication, then the answer is clearly yes. Letterman hosted the aforementioned Jack White, who teamed up with Wanda Jackson for an absolutely killer  performance of “Shakin’ All Over”, off their recent collaborative album, The Party Ain’t Over. (Once again, Jack blows our minds.) Plus, The Decemberists showed up on Leno to play “Down by the Water” (unfortunately, Ben Affleck didn’t take part).

For those who can’t be two places at once, check out the clips, courtsey of The Audio Perv.

The Decemberists – “Down by the Water”