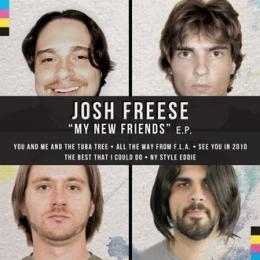 Dont let the photo above fool you. Josh Freese is a busy, busy man. In recent years, the drummer has lent his talents to A Perfect Circle, Devo, Katy Perry, Nine Inch Nails, Social Distortion, Weezer, and a horde of others, which prompts the million dollar question, Josh Freese: man or machine? And yet, hes somehow managed to squeeze in some solo work into his loaded schedule.

My New Friends is both a follow-up and a companion to his previous studio album, Since 1972, and will showcase his diverse musical skills. Freese plays all of the instruments on the EP and also promises to give you more bang for your buck.

If you recall, Freese established a pricing system for Since 1972, which ranged from $7 for a digital download and up to $75,000 for an autographed CD/DVD, digital download, t-shirt, drum set, Freese joining the buyers band or becoming a personal assistant for a month, the opportunity to join Freese on tour, a five-song EP written about the buyer, a flying trapeze lesson, and a raw lasagna meal courtesy of Robin Finck (Nine Inch Nails) and his wife.

Freese dropped some interesting tidbits on Blabbermouth concerning the Since 1972 packages and his ideas on doing something similar for his upcoming EP:

On the Since 1972 packages: All the direct-to-fan stuff that I sold and wacky stuff that I participated in was a great success, in my opinion. Because all I really wanted was to get people talking about my record, forwarding the web site to their friends, having a laugh about it and say Can you believe what this guys doing? I honestly didnt expect to sell as many of those things as I did.

On potential packages for My New Friends: I have a few things up my sleeve but it won’t be as elaborate as the last batch. It took a lot out of me that last time around. Ill probably do another set of P.F. Changs lunch dates and some more of the thank you phone calls like I did on the last album. I am going to have a few involved packages that will include everything ranging from customized box sets to having Dexter from the Offspring fly us in his jet up to San Luis Obispo and go see Bubble Gum Alley (I think if ya slip Dexter a C-note, hell do a few doughnuts or wheelies on the way back). Im also trying to get Tommy Lee involved in a séance up at Danny Lohners castle with one of the buyers too. Maybe have him DJ while we get in touch with the spirit of Divine or Buddy Rich or something.

Freese plans to announce package details on March 28 via his official website. My New Friends is scheduled for release on April 1st via Outerscope Records.