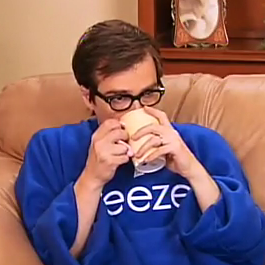 Anyone who’s been following Weezer recently will attest that Rivers Cuomo and co. have been cashing in on the popularity of the band’s 1996 sophomore album Pinkerton. If you haven’t had enough of the nostalgia yet, you’ll be delighted to hear Cuomo has some more up his sleeve. According to Pitchfork, you will soon have access to his new book, as well as a collection of some Pinkerton-era songs.

His book, The Pinkerton Diaries, basically a collection of everything in Cuomo’s brain in the mid-’90s, has been delayed for months. Cuomo reportedly said the book is “a collection of all my journals, emails, letters, photos, school papers — everything from those years ’94-’97, so you get an inside look as to exactly what I was thinking.” This may be excessive, but not quite as creepy as reading Kurt Cobain’s diary, being that Cuomo is alive and well.

Alongside the book will be Rivers’ third Alone album, which has been referred to as Alone III: The Pinkerton Years. Whatever the final subtitle will be, Alone III will feature outtakes from the same era as the book; you can expect the product to be of the same cloth as the other two Alone albums.

Weezer fans have been privy to this information for months, but what makes it exciting is Cuomo has given us a cool little preview video and tentative release month. The YouTube clip, uploaded yesterday and which you can watch below, features Cuomo flipping through and discussing the release. Cuomo also says he will sign 500 posters (shown above) for people who preorder the book and the CD. The video description promises both will be out in March.

In case this is all making you forget what Weezer has become, Billboard also has more about that duet Cuomo recorded with Miranda Cosgrove, star of Nickelodeon’s sitcom iCarly. The collaboration was for the song “High Maintenance”, the title track for her upcoming second album. Cosgrove said of the experience, “It’s the first duet I’ve ever done, and it was really fun. My part of the song is this girl who’s high maintenance, and Rivers is this guy who’s having to put up with it. I really enjoyed working with [Cuomo]. He’s really cool.” Hey, at least we have Rivers-Bethany to look forward to.