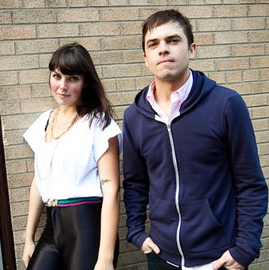 As one of our top 100 albums of 2010, there’s no denying the mass appeal Sleigh Bells‘ debut LP Treats had; its sonic blast of sugar-coated simplicity got a lot of kids hooked on the sounds of Derek E. Miller and Alexis Krauss right quick. Of course, there’s no better indicator of an album’s staying power than how much a band tour behind it, which in the case of Treats is a boatload.

Sleigh Bells’ latest onslaught of live shows will kick off April 21st in San Antonio, TX. With support provided by Brazilian rockers CSS and Neon Indian, the band will then crisscross the country until early June, ending in Denver on the 4th. Check out the entire list of confirmed dates below.

Of course, tour dates aside, there are other ways to enhance one’s staying power. For instance, a Diplo remix of the song “Tell Em” could do the trick. However, we’re thinking it’s this next tidbit that Diplo blogged about regarding the band that could be the most effective: “in fact i like sleigh bells so much .. me and switch was in studio in nyc tryin to make tracks with derek and beyonce last week after we played her team their album .. dunno if we gonna manage to finish but was good times.” Sasha Fierce has gone lo-fi, y’all.