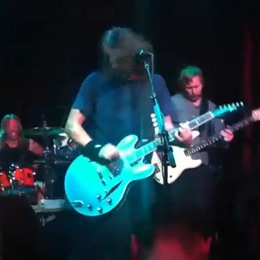 Up until now, our previews of Foo Fighters’ forthcoming 7th LP have come in the form of 10 and 28-second snippets. But thanks to a last-minute concert in Los Angeles last night, we finally have more details, as well as a taste that lasts beyond 29 seconds.

Announced via Twitter just hours before showtime, Dave Grol and Co. played a 26-song set at the 300-capacity Velvet Jones night club. According to Antiquet‘s Johnny Firecloud, who also has a must-read review of the show, the set saw the band begin by playing all 11 tracks off their new LP in sequential order before dedicating the second half of the show to the rest of their discography. Below, you can find the complete setlist; presumably the first 11 tracks — which are italicized — are the same as the album’s setlist. So there you go.

Also below, we have video of one new track, “These Days”, which Firecloud described as “an accusatory song that demands a little empathy.” Update: A YouTube user named squaresoflight has uploaded a 10-minute highlights clip featuring snippets of several news songs, including “Bridge Burning”, “Rope”, “White Limo”, “These Days”, “Matter of Time”, “Miss the Misery”, and “I Should Have Known”.

Setlist:
Bridge Burning
Rope
Dear Rosemary
White Limo
Arlandria
These Days
Back & Forth
Matter of Time
Miss the Misery
I Shoulda Know
Walk
All My Life
Times Like These
Generator
My Hero
Learn to Fly
Watershed
Up in Arms
Big Me
Enough Space
Monkeywrench
Hey JP
Everlong
—
Pretender
I’ll Stick Around
This is a Call