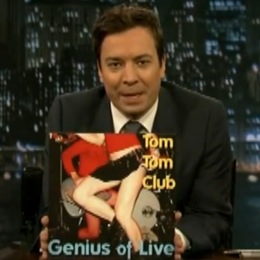 They have new music coming, but until then, it’s awesome to see Tom Tom Club playing a classic on TV. Supporting the band’s latest release Genius of Live, the Talking Heads offshoot stopped by Late Night with Jimmy Fallon to play, obviously, the early 1981 hit “Genius of Love”. There is nothing surprising about the band’s ability to pull the song off 30 years later, but what is surprising is a 60-year-old Tina Weymouth can still show up in a leather miniskirt and not look a day older than 38.

The band is still Weymouth and husband/drummer Chris Frantz, but five or six other folks share the stage with the new wave duo. Ol’ Dirty Bastard was not among them last night, but Frantz yelling “Jimmy Fallon, rock the house” in a raspy voice was close enough. Additionally, every set should end with “Ok, bye.” Watch above, courtesy of The Audio Perv.