Against Me!, Fences close out second night handily at San Francisco’s Slim’s (2/1) 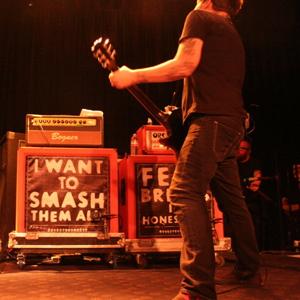 It’s always a fun exercise in people-watching at a punk show. A couple of teens with pink and/or green hair and nose rings, aging tough guys who just want to mosh, the one guy with two feet of pure fauxhawk sitting on his skull.

None of these people were at Slim’s in San Francisco last night to see Fences. Fences was an odd choice for Against Me! to bring along for its North American headlining tour, but Against Me! is a band that has opened for Silversun Pickups and Foo Fighters in the past. Not exactly peanut butter and jelly. Fences, a.k.a. Christopher Mansfield, and his band looked the part; Mansfield was adorned with tattoos and was wearing all the right clothes, and the guitarist/keyboardist had spiky hair. I imagine Fences started out thinking he’d be in a punk band, then discovered Bright Eyes and it changed his life.

He has the Oberstian mid-syllable quiver down pat (“The Same Tattoos”), and is either too shy or too cool to open his eyes while performing. And wounded, always wounded, as he announced via Twitter shortly after leaving stage. While he lacks energy or compelling stage presence — which is kind of important when you’re playing to lots of high schoolers with no attention span — he has some tunes worth checking out.

The Florida band led by Tom Gabel had a very specific look, but pink hair is so 1983. Still, Against Me!’s look was comical in its own way. You could swear the bassist and guitarist are brothers, but no sir. Just two equally overweight guys with equally impressive beards (okay, Andrew Seward wins by a little). Equality was a theme, with all four band members dressed in black shirts and jeans, and none having a greater volume of tattoos than another. Drummer Jay Weinberg, the new recruit, did not fit in for that reason. But onto the music.

Against Me! opened the proceedings with a couple of oldies but goodies, “Pints of Guinness Make You Strong” and “Cliché Guevara”, two crunchy tunes with abrasive vocals, not unlike the rest of Against Me!’s catalogue. Another characteristic of the band’s catalogue is many of the songs are around two minutes, so you can imagine the band would tear through each one without pause for applause; the set consisted of about 25 songs at less than an hour and a half.

Other highlights of the show included the infectious hits “Thrash Unreal”, “Stop!”, and “I Was a Teenage Anarchist”. You don’t expect a lot of variation at this sort of show, but Against Me! did slow it down at the right moments with “Borne on the FM Waves of the Heart” and the acoustic ballad “Joy”.

It did feel a little too manufactured. I last saw these guys, sans Weinberg, in 2005 at a tiny venue in Monterey Bay. Maybe this is out of the band’s control, but the atmosphere at this show didn’t compare to the 2005 performance. Credit to the Slim’s show: Despite the gigantic “no moshing, crowdsurfing, stage diving, or fun” sign, security allowed all except for stage diving with no resistance. But it all added up to a lowest-common-denominator punk show. In Monterey, the majority of the crowd contributed to the vibe, there was stage diving, there were fans on stage screaming lyrics into the mic — it was anarchy. There was something off about the band playing “I Was a Teenage Anarchist” last night, then throwing in “Baby, I’m an Anarchist” during the encore; it was just a little more fun when it seemed like Gabel meant it.

Eh, screw it. You don’t go to an Against Me! show to meditate on the role of government; you go to party and sing and all that nonsense, and it’s a good time. And there are lots of cool hairdos to boot.

Setlist (in no particular order):
Pints of Guinness Make You Strong
Cliché Guevara
High Pressure Low
Thrash Unreal
Miami
Stop!
T.S.R. (This Shit Rules)
Walking Is Still Honest
White Crosses
Ache with Me
White People for Peace
I Was a Teenage Anarchist
Borne on the FM Waves of the Heart
From Her Lips to God’s Ears
Sink, Florida, Sink
Slurring the Rhythms
Rice and Bread
Up the Cuts
New Wave
Those Anarcho Punks Are Mysterious…
I Still Love You Julie
Encore:
Joy
Amputations (Tom Gabel cover)
Tonight We’re Gonna Give It 35 Percent
Baby, I’m an Anarchist
We Laugh at Danger
——