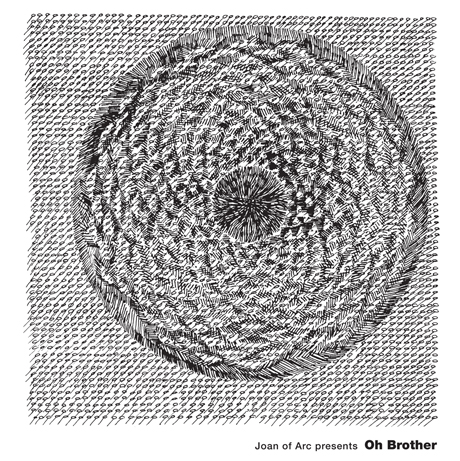 While not necessarily immensely popular worldwide, Joan of Arc is undeniable Chicago royalty. The phoenix born out of the ashes of much beloved emo forefathers Cap’n Jazz, the “band” could more properly be considered a loose collective centered around Tim Kinsella, other members flitting and floating among other interchangeable monikers. What’s more, Kinsella’s brother Mike and cousin Nate have both been involved in the project. So, in a sense, the project reads more as a family affair than a band, players coming and going when they can, names swapped around at leisure rather than creating a masthead for recognition. Yet recognition they have, for their willingness to experiment with indie rock forms, for their intense musicianship, for their brilliant sense of humor (their album Live in Chicago 1999, for example, uses that first word in terms of residence, rather than connoting a live recording).

On this new disc, though, the experimentation is the key. Casual Cap’n Jazz fans need to look somewhere else for an emo kick; instead, Kinsella has put together a special edition, four-LP collection with multiple lineups and collaborations, each recording a 20-minute or so long side of droney, noisey meditations. The four pieces are also “spliced together” (as the press release puts it) into one larger unit (more thematically or mystically than actually musically), joining at least fourteen musicians into one huge, surprisingly cohesive effort.

The first of the four units featured on Oh Brother is the established Friend/Enemy. The group’s past output has been a sort of weird middle ground between jazz, punk, and folk (yes, drink that all in for a second), thanks to the varied membership, which includes weirdo drummer Zach Hill (also of Hella), former Cap’n Jazzer Sam Zurick , and Nate Kinsella, among others. The piece opens with a drone that seems built on organ and/or melodicas; growling underworld scrapes fold in underneath before taking over entirely, Hill seemingly flailing at any hard surface he can find. A sliding electric guitar riff eventually focuses everything, signaling the entrance of an expansive, head-nodding math rock fragment. Squelching, abrasive static fades everything out, returning to the wide, empty, improvised noise that came before it, this time heavier on odd synth nosies. A lighter math-y section comes next, the cycle repeating itself.

Side 2 is credited to TK/FR Duo, Kinsella dueting with Chicago improvised jazz mainstay Frank Rosaly. Rosaly, one of the best working percussionists in the scene, if not the city as a whole, probably adds as much electronic knob-twiddling as he does kit-work on the track (as he did on his excellent Milkwork just last year), though it’s not specifically noted. The mind-numbing electronic meditation is rhythmically enchanting, flashes of analog synth glimmering over a sampled base. When the two finally hit a stride, the sample is stripped to a single layer, Kinsella chopping out looped guitar chords and bass thumps, adding bigger squeals of electronics under a straight-ahead beat from Rosaly. The two find an airy bigness midway through before returning to a funky, skronky noise-rock groove.

The cleverly titled Likins collaboration is featured on “Oh Brother #3”, a combination of Robert A.A. Lowe’s Lichens moniker and the Kins of Kinsella. Personally, this was the most exciting sounding collaboration on the press release. Formerly putting out spacy post-rock with 90 Day Men and currently blowing minds as Lichens, Lowe’s unique take on droning electro-acoustic music is something that demands to be seen and heard. Live, Lowe’s work is all-encompassing, walls of sampled vocal howls and whistles paired with whatever instrument he seems to have on hand, whether it’s an acoustic guitar and a gong or an analog synth. This track is no different; meditative oms, fluttering melodica, walls of buzzing-hornet guitar scrapes and shattered drum throws all grasp for attention. Things almost get dance-able near the 13-minute mark, proving that even master experimenters don’t want to rest on their experimental laurels.

The final take, played by a group called Mineral Totem, decidedly takes a different take on the opening of their side of the slab. A heavy sigh and what may be a tin whistle cover the first minute and a half, a messy math rock taking over thereafter. Walls of sound come and go, and chuckling, forced bass vocals pop into aural sight, all before an acoustic section takes hold, finally closing on a shifting analog synth mass.

Altogether, the four sides amass some of the best improvisers and experimenters Chicago has to offer, with some luminaries from outside the city as well. This isn’t a document of a scene, however; the rotating cast work off of each other and Kinsella at the center, producing some massive, enchanting drones that will be a source of repeat listening for quite some time.