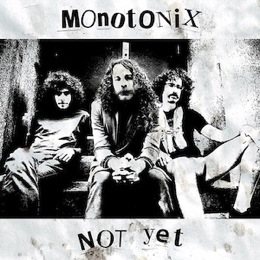 Monotonix wants to kick your ass. Not literally, of course, but with sound, and at the end of their latest album, Not Yet, the band would be happy to share a beer afterwards, too. Like a punk rock Rolling Stones, Monotonix brings its A game and holds nothing back. The band knows exactly who they are and has no intention of “maturing” or “experimenting” or any of that other crap. No, they simply want to rock.

Not Yet is a full-on assault of punk rock grooves that’s meant to perpetuate what we already knew about the band, giving more fuel to their bone-breaking live shows. Much of Not Yet parallels their previous work, providing quick-fire tracks slapped together in early hardcore fashion with a well-worn dose of rock ‘n’ roll akin to a new leather jacket on a sweaty back.

For the most part, the songs intentionally run into each other. Ami Shalev’s half-sing, half-yell is the signature sound, giving the same throat-straining notes throughout. Adding a constant punching beat along with it, the rest is left to the loud sloppy guitars that tear up the album with sonic riffs and screeching solos. It sounds as though it was recorded in a squat house, and in a single take at that. This was the appeal of the band in the first place, an unmatched rawness that’s rarely heard nowadays, even with the lo-fi take-over of indie rock.

Amongst all the bombardment, Not Yet gives us rock to not only dance to, but also throw up some fists for. “Before I Pass” tames the beast with catchy riffs, a quick fret exchange in between chunky chords showing there’s real talent behind the noise. It cruises right into “Blind Again” for yet another hip shaker. Punk speed is thrown in with the drums, creating a level of chaos in every other measure.

Going slightly beyond that, “Late Night” hits a bar rock stride as they pick up a bit more in the melody for good measure. The guitar work takes on a 90’s alt rock flair, adding something extra to the mix that doesn’t necessarily aim to get us all riled up, and, after five minutes, it doesn’t feel like enough. After all that, the album ends as it started on “I’ve Never Died”: with guitars, drums, and Shalev in full force, getting one more mosh pit going before signing off.

The key to Not Yet is that it throws back to an era of So-Cal punk rock that could deliver a killer melody and still be uncompromising in its core. Tracks like “Fun Fun Fun” and “Give Me More” embody that ideal perfectly, almost like a tribute to Henry Rollins. Unfortunately, such a good time means these songs feel too short, the best of them leaving that desire for more.

This new record is nothing surprising. It’s everything that you’d expect. Right out of the gate, the message is clear: It is who it is, giving us a band, and an album, full of confidence and bruises. Yet by just being who it is, the music works, and, rightfully so, doesn’t need to prove anything to anyone. The formula they use, while in reality not their own, has already been proven countless times, so there’s no need to mess with it. This band is yet another paragraph in the big book of punk rock, and this album makes sure the paragraph is, at the very least, highlighted.