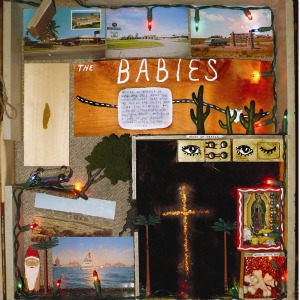 Elementary math tells us that 1+1=2. Following that logic, Vivian Girls plus Woods should equal some sort of hazy, distorted folk/garage rock/lo-fi fusion: a hybridization of danceable melodies and atmospheric, psychedelic folk. Elementary math couldn’t predict The Babies. Vivian Girls’ frontwoman Cassie Ramone alongside Woods’ bassist/guitarist Kevin Morby equals three. Maybe even four, or five. A series of demos made by Brooklyn roommates as a way to pass the time over a summer, fully fleshed out with drummer Justin Sullivan and bassist Nathaneal Stark, grew into The Babies’ self-titled debut, a glorious 30 minutes rich in addictive melodies, catchy choruses, and relentless energy.

The Babies begins with “Run Me Over”, a playful guitar ditty that develops into a wall of distortion, groovy basslines, pounding percussion, and tambourine. The whole package takes you on a ride–alongside lofty background vocals wailing, a grungy guitar solo, and tag-teamed vocals nearly shouting “Why you gotta run me over?/Why you gotta run me down?/Took me apart, put me back together/And didn’t like what you found,” vividly painting pictures of lovers and summers past.

The majority of the album follows this formula – songs less than three minutes long, featuring a danceable guitar melody that builds to a distorted cacophony of somewhat atonal vocals, loud percussion, and groovy basslines. The other vocalist takes the reigns for a verse or two, then the song’s over. This approach fails to be monotonous or tiring, though. Instead, The Babies is non-stop fun, refreshing in its straightforward approach and uncompromising energy. Exemplifying this format is “Meet Me in the City”, a favorite from their previously released EP, which perhaps shows The Babies at their best. Playing like a potential future Best Coast/Wavves collaboration, Morby takes the vocal lead with Ramone on lofty, reverberated back-ups. The surfy melody and simple chorus are irresistible, sure to get a crowd shouting and dancing.

Although they are masters at the art, The Babies smartly avoid the trap of solely making danceable tracks that sacrifice depth. Stepping outside of their formulaic approach (which characterizes a lot of their songs) are back-to-back tracks “Wild 1” and “Wild 2”. In the former, Ramone croons over sour chords, lamenting a dysfunctional relationship. Although her voice won’t appeal to everyone, the sincerity and emotion in her delivery are not debatable, especially with the plea, “Don’t hurt me, and I won’t hurt you / What are we gonna do?”. The crescendo of descending scales in the breakdown demonstrates a previously unseen precision. “Wild 2” is Morby’s response, a reconciliation. The beginning plays like an apology (“Tried to miss you but only misplaced you”), and grows into a triumphant declaration of hope for the future (“Hey, kid – It’s only love”). The two tracks perfectly complement each other, just as Ramone and Morby do throughout the duration of the album.

It’s hard to accept The Babies as merely a side project. Although they are briefly touring the West Coast in support of this album, Cassie Ramone is still primarily a Vivian Girl, and Kevin Morby is still principally a member of Woods. Alas, until the next time the two have a free summer in New York together, this 11-track collection of unbridled energy and fun will just have to do.

I guess things could be worse.