The Streets  Computers and Blues 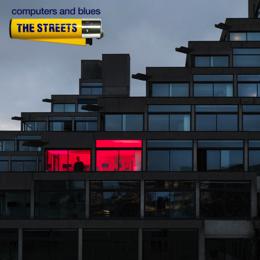 It’s with good reason that Mike Skinner is calling it quits with The Streets, a moniker he’s spent the past decade making his name on. His patented combo of awkward rhymes, stoner philosophy, clever social commentary, and clanky UK garage made a huge splash with his stellar 2001 debut, Original Pirate Material, and its even better follow-up, A Grand Don’t Come for Free. As his palette expanded, though, Skinner’s creative genius seemed to fade as the admittedly limited scope of his work became increasingly evident; The Hardest Way to Make An Easy Living saw Skinner stumble through coming to terms with his newfound fame by way of clever gossip about British high-life, and the heavy-handed metaphysics of 2008’s Everything is Borrowed didn’t do much to help things. Even so, Skinner looks back on things pensively at the end of his five-album deal with Warner Music (which he’s reiterated spells the end of the line for the Streets) and manages to end things on a rather high note.

Part of why the Streets’ US fame never even began to approach the heights he reached in his homeland (he’s had all four of his LPs break the top 10 and 12 top 40 singles in the UK but has yet to crack the Billboard Top 100 in the States) is that Skinner’s aforementioned musical formula is inherently very British: Many American hip-hop fans would find his tame, unthreatening rhymes about chips and fake tan to be laughable, and conferring titles like “45th generation Roman” onto himself, as he infamously did on Original Pirate Material‘s “Turn the Page”, hardly adds to his menace. Because Skinner doesn’t extend too much outside of his lyrical and musical comfort zone, his fifth record isn’t likely to change many minds about him and his music.

That does little to detract from the album’s quality, though, as Skinner quickly proves his sharp wit to be well intact on the album’s second single, “Going Through Hell”, taking a crack at an old cliché in vintage Streets form: “I wouldn’t say a word till I’ve walked a mile in your shoes, but once a mile from you I’ll utter what the f*** I choose, wearing nice new shoes.” Some of the record’s best moments come when Skinner lets his guard down, specifically on the superb ”ABC”, whose banging beat and breakneck pace recalls the Streets’ status as one of the first purveyors of grime and dubstep.

Elsewhere on the record, Skinner ponders everything from Call of Duty-induced nerves on “Without Thinking” to Google’s inability to answer our emotional problems on the standout “Puzzled by People” in his usual half-spoken, half-rapped delivery. He spends much of Computers and Blues throwing around his standard sort of 21st century suburban blues with a newfound maturity. On the moving “Blip On A Screen”, for instance, he expresses wonder and perplexity at the first sight of his unborn child in a tiny ultrasound image. Even when he does rap about things like relationship status changes on Facebook, as he does on “OMG”, it’s not without a fresh sense of introspection and growth that makes for one of the album’s more compelling tracks.

Even though it’s not quite his best album, Computers and Blues catches the Streets at the best he’s been in years. The 32-year-old MC knows better than to simply rehash the success of his early career, opting instead for an endearingly honest album that manages to toe the thin line between retrospection and progress. Mike Skinner never paid much mind to big ideas, nor lack thereof; even praise for his acclaimed concept album A Grand Don’t Come for Free centered on its unelaborate, simpleminded charm; and in this way, the absentminded wit and charm of Computers‘ best tracks make for quite the swan song and fittingly solid closure to one of the most intriguing musical careers in recent years.