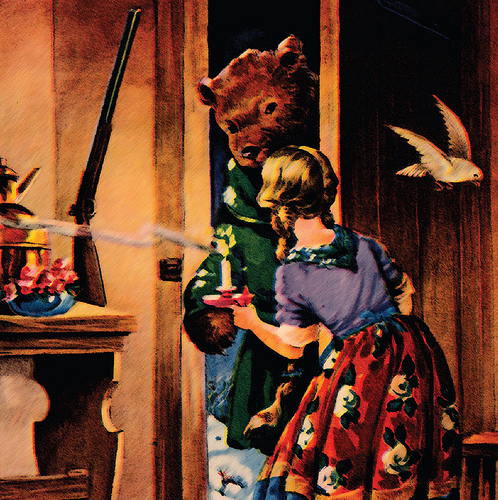 Sporadic bursts of circus-themed noise. The sludgy guitar grind of heavy metal. Unpredictable blasts of horn instruments. There’s no denying the influence of Mr. Bungle in every note of Umlaut’s self-titled album, and how can comparisons not be drawn when the band is the musical venture of Mr. Bungle’s saxophonist Clinton “BÃ¤r” McKinnon. But though it’s easy to see where McKinnon is drawing from, the Australian-based Umlaut is a wholly original project that takes a proven, experimental concept and makes it all its own.

Umlaut has been called “a rock band without the rock”, and that moniker isn’t completely unwarranted. The band does rock, especially when the swampy guitars beat down the retro, jazz-backed doors that slink throughout the entire album. But the real “rock” comes not from an ubiquitous air of heavy metal but from the noisy assault of twisted horn sections, pounding drums, and eerie samples. It’s an otherworldly tweak on something comforting and beautiful – a lot of the album is purely instrumental in vein of most classical compositions. There’s just a healthy dose of insanity.

The first song on the album, “Kitty Puppy”, jumps right into this theme with a fuzzy guitar intro that swaggers in like a drunk debutante before being inundated by unsettling organ music and nursery-rhyme xylophones. Any baby animal cuteness is eradicated by the heavy metal assaults in the latter half of the song.

The cartoon-ish, banjo-strumming “Atlas Face” features a haunting falsetto that’s sure to ring true in any experimental music fan’s heart. It belongs to none other than Mike Patton whose unmistakable vocals guest on this song. The combination of three different singing styles is a testament to Patton’s ability. It’s hard to say if this is what Mr. Bungle would sound like these days had the band not broken up (there are a few other key members missing), but Umlaut manages to make it original.

The dreamy falsetto howls continue (sans Patton) with “The Mistaken Power” – warbling, moody and atmospheric, it evokes a creaking old ship, or the spinning rope of a tightly-wound noose (“Dead Goon” anyone?).

“Dirty Dishes” is decidedly more upbeat with rolicking drums, unison chants, and McKinnon’s silky saxophone. Driving metal riffs off into a sunshiney chorus. “Living the Dream” leads in with tinkling piano keys and flute pipings. Marching band drums round it out but the listener doesn’t escape without some hint of weird, this time in the form of carnival-flavored sounds.

“Bigfoot is Real” is a mix of mythic proportions. There are dark, heavy, greasy guitar riffs. Bubbling, oversaturated bass lines. Samples of a restaurant with pleasant serenading music, minor background babble and clinking silverware. Surreal? Of course. After all, as the title suggests:”Bigfoot is Real”. It works.

“Work Truck” is a catchy tune propelled along a rolling bassline and gritty guitar work. The spacey, almost new-agey “The Horrible Things We Say” is a  jaunt through classical overtures while “Chill Pill” mimics a jazz album being tossed in a thrashing blender, with a sprinkling of soft vocals on top.

The innocuously-named “Buttons” is one of the best tracks on the album. It’s beautiful in its sparseness and dangerous in its rhythm. It lets you be seduced by the dramatic, classical composition before being jolted by a electronic beats, dark melodies and a guitar that screams. The soaring synth ending stirs the nerves inside your chest – this could be a theme song to David Lynch movie.

“Dain Bramage” may cause brain damage with its creepy twist on delicate instrumentals. It sounds like a fairy-tale being raped. Actually, that statement kind of sums up the entire sound of Umlaut; a soft innocence broken by hard-edged absurdity.

If you’re a supporter of avant garde and experimental music, this album begs to be in your music collection. And if you’re not so adventurously inclined but have an open mind, Umlaut is a good place to start if you’re looking to broaden your musical horizons. There’s enough structure and strong song-writing prowess to lull your mind into a false sense of security and by the time the unbalanced noises and tripped-out melodies sneak in there, it’s too late. You’re hooked and all the better for it.