Daft Punk get their own Coca-Cola line 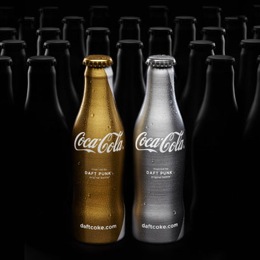 Daft Punk won’t be walking home with an Oscar this Sunday, but Tom and Guy do have an equally impressive claim to fame: they’ll soon be able open their fridge and pull out a bottle of Daft Coke. That’s because the iconic French duo have just partnered with Coca-Cola for a specially branded version of the soda. According to Hypebeast, Daft Coke will be available starting in March, and will be produced in two distinctive colorways (silver and gold), which were inspired by the helmets worn by Daft Punk.

This marks the second time Coke has paired up with a dance-inducing outfit. In 2009, Justice got their own Coke bottle, but I guess that went the way of their new music. (Instant rimshot)

Update: Compliments of Andamos Armados, we also have the radio promo for Daft Coke. Who’s ready for a remix?