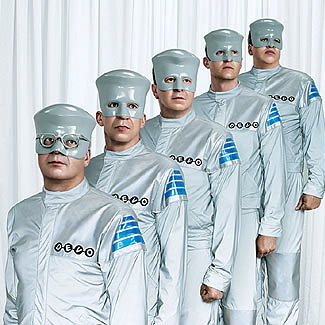 The Devolution resumes this March, after an injured hand to Bob Mothersbaugh, aka Bob 1, forced his band to cancel some dates, including headlining gigs at Fun Fun Fun Fest and the inaugural Moogfest. Bob 1 is all better now, according to his doctors, and he’s ready to play again. As he so humbly put it: “Thanks for all the cards and gifts, but cash would be better!”

Devo‘s formerly fall-now spring tour in support of the band’s first new album since 1990, Something for Everybody, will include the rescheduled dates in San Francisco, Los Angeles, and Solana Beach, California. Now, the band has surrounded those with four new stops on the western side of the States. Ceremonies begin in Seattle on March 15th, and Devo will pass through Portland the next day on the way to California. After finishing the coastal trip, Devo will head to Texas for a couple dates, one in Houston and the other in Austin on the 27th.

The Austin gig in particular is notable, as Devo reunites with the guys and gal who helped Devo deliver to their disappointed fans at the aforementioned Moogfest, Austin’s own The Octopus Project. The gig will be part of the Austin City Limits Live series at the Moody Theater.

More gigs are said to be forthcoming, but for now seize your ticket at Seatgeek — and make sure to wear your energy dome!