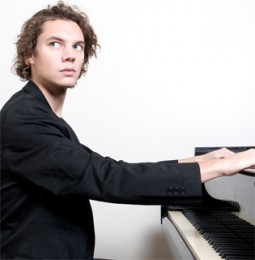 At one point during the double piano set by whiz kid Francesco Tristano and veteran Bruce Brubaker— two artists steeped in the 20th-century piano tradition– I jotted down in my notes: “I’m just not sure what the point is supposed to be.” Maybe that was the point. Avant-garde artists frequently set out to mystify their audiences, appealing to an elite and eccentric few, while shock and confusion were stalwart aesthetic values of the Fluxus movement and other happenings going on in this city during the 1960s and 70s. Make no mistake– Tristano and Brubaker are consummate musicians, unarguably at the top of their respective fields, and they know their stuff. They had a novel, wild idea: play two concerts with programs of both contemporary and classical piano music, from Cage to Schumann to Buxtehude, at the same time, at one of the hippest venues for classical music in the country. See what kind of freaky concurrences result, how each pianist will engage in a dialogue with both the music and with each other, and how the introduction of electronics will affect a wonderful synchronism of styles, touching on all the notable giants of piano music over the last 400 years. Unfortunately, their idea simply didn’t translate to practice.

Tristano is an artist who has mastered his instrument across various classical genres, having recorded both the complete keyboard concertos of J.S. Bach and the complete piano music of Luciano Berio. He is also an accomplished electronic artist, creating restrained and intelligent pieces of electronic music that toe the thin line between pop and classical, between Brian Eno and Philip Glass. Brubaker is an equally accomplished artist, especially fond of minimalists John Adams and Philip Glass, and the early works of John Cage, which actually sound out as music. All of these musical ideas are ones that I like– so why didn’t they gel in concert?

One issue was a lack of form in both the overall presentation of the show and the pieces themselves. Played as one continuous hour of music without any breaks for applause or for the audience to get their bearings, the music came off in an onslaught of sound. Many of these are outstanding pieces on their own– Messiaen’s Regard du PÃ¨re and Cage’s Dream, for example– that weren’t allowed to breathe in their own space; they lacked a certain formal rigor. These are complete works, composed by exceptional musicians who understood that music needs to stand on a strong structure. Chopping up a Buxtehude fugue and interjecting anachronistic 20th-century harmonies seems to defeat the purpose of the genre altogether, leaving the audience unable to hear the delicate interplay of interweaving counterpoint when the rhythm lags and sections are interrupted. More detrimentally, there was very little dynamic range or expressive variety; the entire performance sat comfortably mezzo-piano with a hushed, atmospheric mood.

The pianists seemed to play with an overdeveloped sense of rubato, destroying much of the rhythmic drive that this music has. Even a piece by Philip Glass, a composer known for his notorious musical pulsations, sounded like an impressionistic cascade of chords rather than a rhythmically grounded work. The aforementioned fugue lagged, and moments of Schumann fantasies were a little too fantastical. The night was a pastiche of historical fragments: a Baroque trill here, a rich series of Romantic harmonies there, a chunk of a fugue, a plucked piano string, a Picardy third, and electronic blips.

There were parts that did work, mostly when simultaneous pieces seemed to actually complement each other (a stylistic dissonance was the norm for most of the evening). Tristano’s original piece Mambo (heard below) set up a funky, off-kilter bass line that pushed the music forward in one of the few overtly driving segments of the set, accompanied by the loud consonant chords of Glass’s Wichita Vortex Sutra. Unfortunately, the electronics were too tame in the live performance. Bits of Schumann’s FantasiestÃ¼cke intermingled with the lush, impressionistic harmonies of Cage’s Dream.

Yet most of the night came off as sounding like “the classics” played on the grand piano, in a rhapsodic, tempo-free milieu, while dissonant electronic sounds burst out from the electric piano. The indeterminate aspect of the performance (I’m not sure how much of this was actually synchronized) seemed a direct lineage from Cage, while the dissonant pointillism surrounding recognizable consonance was a hallmark of Ives’s style. Both are ideas that I’m quite fond of. It was, to be sure, an admirable experiment, something that has worked for others and, for some listeners, probably lit up their night– as I left the venue, I heard a number of patrons comment on how much they enjoyed the show. For me, it was postmodernism gone wrong.