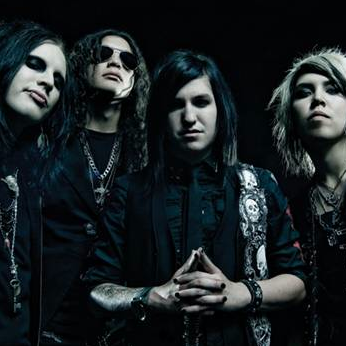 Parents. Unless you were on chaperone duty Sunday night at Chicagos Vic Theatre, you probably have little idea of what your children are up to these days. Sure, youve noticed, and maybe even come to terms with, the hair dyed raven black, the hoodies (even in the summer), the excessive piercing (fake and otherwise), and the fact that your son has been borrowing his sisters skinny jeans. But what about the wall of death mosh pits, the urge to be constantly sprayed with water (mostly spitted), and the linguistic phenomenon of barking the word fuck so frequently that it loses any semblance of meaning? No, little Johnny and Suzie in that picture on your office desk have grown up, and theyve found the soundtrack to their teenage years: Escape the Fate. And, if you ask the band, theyll probably tell you not to worry. Your kids are alright.

As a music critic, Im half-expected, nay obligated, to lampoon Sundays Dead Masquerade Tour, which brought Escape the Fate and four opening post-hardcore/metalcore bands (Drive A, Get Scared, Motionless in White, and Alesana) to Chicago to play for a crowd of minors (fresh off the school bus). Im supposed to rant about watered-down metal and Hot Topic-generation lambs being led to the capitalist slaughter (a t-shirt at a time). As a literary critic might argue that reading J.K. Rowling doesnt lead children to one day discovering Saul Bellow, Im called upon to argue and lament that these kids are not headed down the path to Fugazi and HÃ¼sker DÃ¼. But I now find myself shirking these duties and turning down my snobbish nose for the time being, perhaps because Ive stumbled upon the most painful realization imaginable for a critic: My opinion, in this instance, means shit. It doesnt really matter that aside from wardrobe and haircuts I couldnt tell one opening bands recycled riffs and screams from anothers. The kids knew and sang/screamed along word for word. And, I suppose, it comes down to this: If bands of twentysomethings cant play for and relate to teens, who really can? (Lord knows theyre a foreign species to me.)

After a deafening crowd chant that lasted several minutes, Escape the Fate stepped right out of their records (complete with a zombie backdrop from the album art of Escape the Fate) for an hour of intense thrashing, strutting, and seizure-inducing lights. They were without bassist/vocalist/co-founder Max Green, who lead singer Craig Mabbitt explained was back home recovering, but 3/4 of the normal lineup was enough for the audience. Old favorites 10 Miles Wide and Flood were nailed to open up the show, and recent single Issues (which has been given several remix treatments) brought on the moshing. If Greens absence affected the set list or performance in any way, the band surely didnt let on, and any vocal shortcomings were compensated for by the backing group of several hundred moshing teens.

When not belting out vocals, Mabbitt played the unlikely role of quirky guidance counselor, speaking to the young audience about the values of being true to and believing in yourself. (Seriously, nobody has tried so hard to instill self-esteem in your children since Mr. Rogers.) Of course, Mabbitt did this in his own way. A commentary about not allowing others to put limitations on you (his version of The Little Engine that Could) quickly turned into a tutorial on giving the middle finger. In more subdued feel-good moments, he shared audience fan art, thanked the troops for their service, and even brought his daughter onstage for a song. See, parents. You probably wont have Mabbitt over to your house to babysit anytime soon, but your kids could be in far worse hands.

Situations, arguably the bands signature song, sent the crowd into a frenzy towards the end of the set, though Mabbitt couldnt quite deliver on it like original vocalist Ronnie Radke could; this song will probably always belong to Radke, and thats no slight on Mabbitt. This War Is Ours (The Guillotine Part II) highlighted the two-song encore with its mix of growls, screams, and Mabbitts runaway vocals, all set to the bands standard blazing guitars and pummeling drums. The only real disappointment of the show was that the Orgy-inspired industrial sound of the last record (arguably the albums most compelling feature) never really got explored during the set.

Max Green promoted last years  Escape the Fate release by dubbing it the cure for the modern-day music epidemic. These are ambitious words (though I wonder with what tone he delivered them) and somewhat laughable ones to folks like me who were sitting in the balcony Sunday night above the sweating, convulsive mayhem on the floor below. Cure my music epidemic? Not a chance. But for those hundreds of Chicago teens who were sent home to sleep off a night of nonstop, eardrum-rupturing fun, I wouldnt doubt that they found a cure for whatever may have ailed them.

Parents. Your kids are probably alright. A bit foulmouthed and well on their way to premature hearing loss, but otherwise alright.