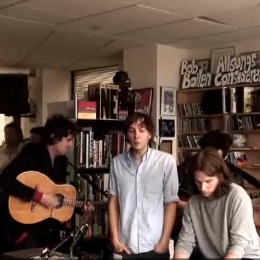 As we all come down from our Arcade Fire highs, it’s good to remember that Phoenix, another Franco-Indie band, surprised us all at last year’s Grammy Awards by nabbing “Best Alternative Album” for their breakout LP Wolfgang Amadeus Phoenix. The French quartet, led by frontman and Sophia Coppla’s beau Thomas Mars, are already chasing the dream of a stellar follow-up LP, their fifth.

“[We’re] going to record a bunch of percussionists,” Mars said in an interview with the Australian zine Pedestrian.tv (via TwentyFourBit). ”If it works, we’ll probably come back and record something that’s going to be on the album.”

“I think ’cause we do a lot music with drum machines and we blend a lot [of] drum machines and real drums,” Mars went on to say. “I think for us, it’s a way to escape that.” Mars explained. “You know, there’s something a little frustrating when you do pop music. And drums are the DNA of our music, ’cause we’d like to go somewhere else, we’d like to change that DNA”

Mars and bassist Deck D’Arcy told Pedestrian.tv they are working with an orchestra in the Australian town of Byron Bay, and tosses out words like “nostalgic”, “futuristic”, “experimental” and “minimal”. He even likens his sonic vision for LP5 to the French commuter rail “TGV” (Train Ã  Grande Vitesse). It’s like a high speed train, but in French.

Phoenix did not give a time frame as to when we may hear LP #5, but we’ll keep you updated. In the meantime, read the entire interview over here.