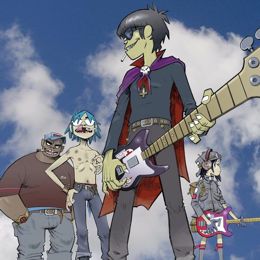 They say things come in three’s and here’s more evidence to support that theory. On the heels of The White Stripes and LCD Soundsystem‘s respective break-ups, People reports that the Damon Albarn-led Gorillaz have also called it quits.

According to the report, the Gorillaz 2010 world tour became “dogged with angry rows” and shortly after the band’s final performance, Albarn and his Gorillaz cohort, Jamie Hewlett, had a “massive argument” that “basically ended things.” Apparently, “things haven’t been great for a while, between Albarn and Hewlett, with Hewlett said to be frustrated at ‘how much time Albarn was giving to his many other projects’ and Albarn was ‘less than impressed with Jamie’s party lifestyle.'”

If the thing reads like a tabloid piece, it’s because it is. That said, the news does come just weeks after Albarn delivered a lengthy speech during the band’s final scheduled concert in which he told the audience that this may be the final time the collective performs together. Currently, Albarn is said to be working with his other acclaimed outfit, Blur, as well as on an opera.

Update: Hewlett’s son, Denholm, posted the following on Gorillaz-Unofficial: “Hey everyonee, listen, i just spoke to my dad and told him about this, and he said its rubbish, they have kinda fallen out, just not about the reasons stated above in the article, they’re just taking time apart from each other to work on other projects. gorillaz are not gunna split up, its fine.”

Update #2: The band denied the report via Twitter: “”Despite rumours to the contrary, Gorillaz are alive and well and misbehaving in London W10”

Hat tip to Gorillaz-Unofficial for the link