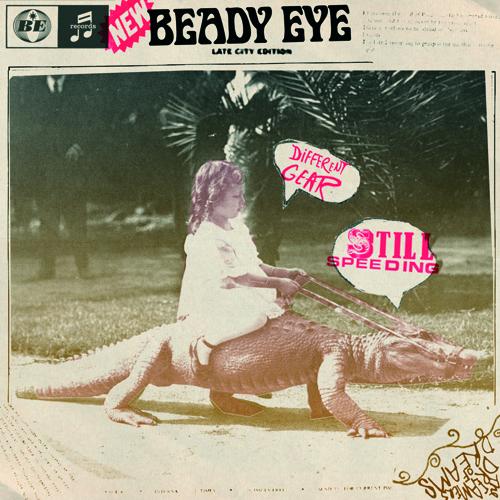 Liam Gallagher has never been one to shy away from boasting his own talents or making ridiculous claims. However, late last year he proclaimed that his new band, Beady Eye, would not be Oasis 2.0, but would basically blow everything Oasis did out of the water. If you’re going to make such bold statements, you really need to be able to back them up – at least even partly. The band’s debut album, Different Gear, Still Speeding, at times has a much different style than Oasis had, but there isn’t one track that sticks out as anything revolutionary, or even one that lets you forget about Oasis. Now, does it sound like an Oasis album? Sometimes, but not always. Is it a passable attempt at making new music by great musicians? Certainly. Should the Gallagher brothers just throw the shit aside and get back together? Definitely…maybe…yes.

The absence of Noel Gallagher, arguably a true source of talent in Oasis, is all too noticeable. Many of the lyrics on this album seem very forced, as if only written to make sure a rhyme takes place. “Four Letter Word”, the album’s opener and second single, stumbles with this problem. It’s a great track to open with, because, musically, it’s a lot rougher, more raw than Oasis. It even gives a little hope that this is truly a different band. However, the lackadaisical chorus and forced bridge (“You’ve had enough/It feels like you’ve blown a 50 amp fuse/It’s gonna be tough/The more you have, the more you can lose”) make this track a little hard to digest. Even Liam Gallagher himself said recently he doesn’t know what any of his lyrics really mean. Well, it shows, pal.

Originality aside, it does have some pleasurable listens. “The Roller”, the softest and best of the three singles released so far, opens with an eerie intro that truly could have been made by Lennon 40 years ago. “Kill For A Dream” sounds like a B-side off of Oasis’ last album (to date), Dig Out Your Soul. On the whole, though, the songs that work best for this album are the slower tempo tracks. Not to discredit guitarist Gem Archer’s talent, but his stale riffs here, much like Liam’s lyrics, come off as forced. You can point to at least one track on every Oasis album and hear how Noel raised the bar for not only himself, but the band around him to keep up. “Rock  ‘n’ Roll Star”, “Roll With It”, “Falling Down” , etc.  are all stellar performances yet are no stand outs that will make you say, “Oh, Noel couldn’t think of that.” Then again, some people might not feel the need for comparisons.

To look at the task at hand, you basically have the exact same band, minus the talent, trying to create something completely different from what they had done for well over a decade. This is not an easy feat and, honestly, doesn’t work. In fact, the ones that stick to the band’s legacy are the most enjoyable tracks, while the others are forgetful, and, in some cases (“Millionaire”, “Beatles And Stones”), almost embarrassing.

Beneath it all, there lies “The Beat Goes On”, another Beatles-esque tune, which happens to be the hidden gem on this album. “Still life remains/Somewhere in my heart the beat goes on,” Gallagher sings sweetly, though his voice is much more beaten up than it was in his younger days. This possible reference to his former life is a bright moment, though a tragic one, as he seems to feel that particular life is over. No fear for the Liam-enthusiasts, as he makes it quite clear that he wants to continue to make music and will do so, no matter who backs him. You can’t fault the guy for that.

So, sure, Beady Eye’s first effort is worth a listen. It’s not a throw away by any means, and has its keepers, but it does come with its share of faults. The band will have to take a step back to see what worked and what didn’t. Hopefully they’ll be able to improve, or at least reach the heights Gallagher had  set for himself. Chances are this isn’t the last we hear from the group, but hopefully the next listen will be a little more memorable and far more substantial.