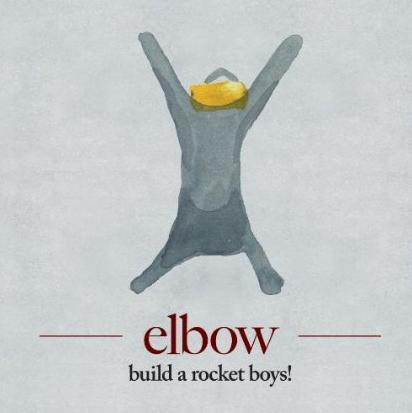 Whenever an artist has a breakthrough success, the temptation to churn out more of the same can be almost overwhelming. If it worked once, it’s sure to work again, right? That’s the situation Elbow was in when they released The Seldom Seen Kid to overwhelming critical praise in 2008. Yet, to the relief of many fans, singer Guy Garvey wipes out any such notions of rehash less than five minutes into their latest album, Build a Rocket Boys!.

“Looking back is for the birds,” he sings over a sluggish bassline and spacey guitar doodlings. Even if the sentiment has nothing to do with the band’s career, it’s still very fitting. Elbow’s fifth studio album sounds both familiar and refreshing, pulling influences from its past catalog but also expanding outward. From their own work, it mixes the layered progressions of Cast of Thousands with the pop sensibilities from The Seldom Seen Kid. As for other artists, it’ll be impossible for you to not hear Peter Gabriel all over the place, along with hints of OK Computer-era Radiohead. Despite the prevalence of these past sounds, it all works together to create a record that feels like forward progression in Elbow’s career, sacrificing neither critical nor commercial appeal.

Opening track, “The Birds”, is worth the price of admission alone. Over the course of eight minutes, the song builds from the sound of a lonesome shaker to an explosive conclusion with waves of instrumentation. Each section evolves into the next musical endeavor, knowing just when to switch it up before the listener gets bored. The opening few minutes are awash with a rumbling bass that keeps everything grounded. About halfway through, takeoff begins, as twinkling guitar notes float around Garvey’s speak-singing.  Suddenly, instead of mumbling out the last word of the the verse, he belts it out as strings flood the speakers, filling out every last bit of musical real estate in glorious melodies. It’s almost like being in the middle of a bustling street in Midtown Manhattan, then as the song moves along, you take an elevator to the top of a skyscraper and see the beautiful landscape as a whole.

Other numbers are equally impressive. “Neat Little Rows” is the only song that really qualifies as “the single.” A James Bond bass guides the verses along over Garvey’s singsong vocals. The easily-digestible chorus features an incredibly catchy, descending piano arpeggio, while the drums beat out a simple pattern. With lyrics that will get lodged in your head (“Lay my bones in the cobblestones/Lay my bones in neat little rows”), this one will be a live favorite for years to come. “Open Arms” kicks off with two competing keyboard melodies that juxtapose sublimely. While the background keyboard line moves at a frantic and jumpy pace, the one in the forefront slowly chugs along, drawing out each note. Drums powerfully pound their way into a group-shout chorus, one which will undoubtedly work well in an arena. Garvey’s performance on this song is stunning, switching from a calm, focused vocal to a passionate, belting rendition within one verse.

Many of the songs found here aren’t necessarily as powerful but still have plenty to love about them. “Lippy Kids”, a defense of British teenagers, is a subtly layered track that combines wordless backing vocals, gentle piano work, and sunny guitar touches into a beautiful, relaxing arrangement. “With Love” is a rhythm-dominated number that lays on keyboard melodies along with The Hallé Youth Choir supplying backup alongside Garvey. “The Night Will Always Win” introduces a light piano pattern that matches the vocals note for note, stripping back much of the lush instrumentation. It’s in love songs like these that Garvey’s lyrical uniqueness shines. It’s not every day that you hear someone say “I’d give my liver to see you abide and ride shotgun” or “I miss your stupid face/I miss your bad advice.” High marks here for originality.

Not everything here is ready for takeoff (last rocket pun, I swear). The utterly forgettable “Jesus Is a Rochdale Girl” is disappointing since it has wonderful imagery (“Sunflowers and paint cans and stolen shopping carts”), but it lacks the melodies to keep your interest. “The Birds (Reprise)” is a completely unnecessary track, featuring a lackluster guest vocal from John Moseley. It doesn’t add anything to the opener and will probably be skipped on many listens.

So…will Build a Rocket Boys! be as much of a career leap for Elbow was The Seldom Seen Kid was? Only time will tell, but it doesn’t seem likely. But that’s alright. The band didn’t set out to create a hit-laden album that repeats the successes of their past. Instead, they’ve crafted an album full of beautifully lush melodies, intricate patterns, and soaring vocalizations. Nearly every song has something great to offer. That certainly sounds like the definition of success.