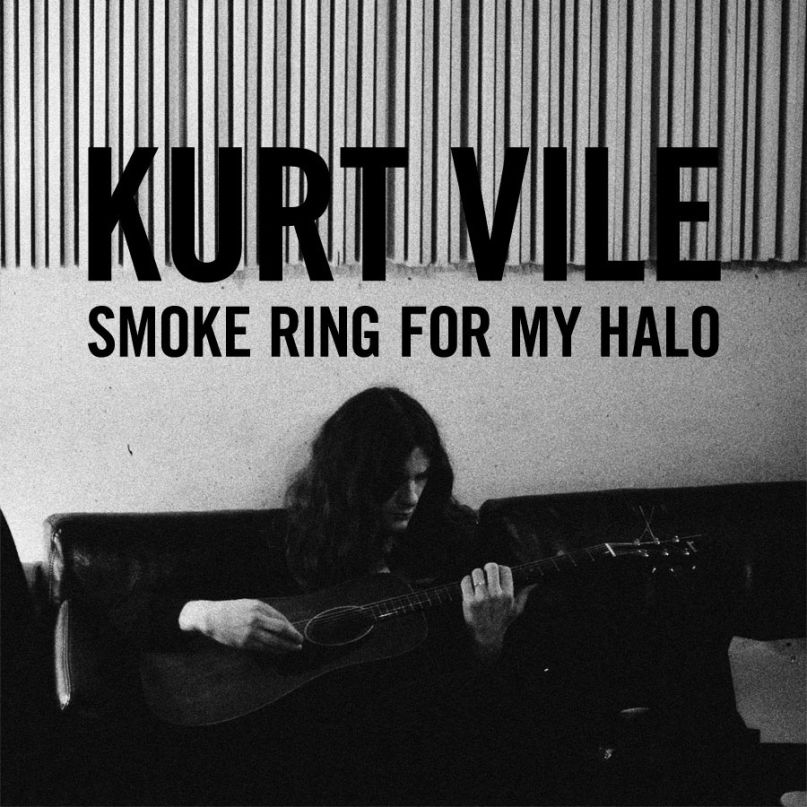 If you can mask your understandable disappointment that Kurt Vile is not the bastard son of Johnny Rotten, or the lesser revelation that he didn’t write The Threepenny Opera, then you may find Smoke Ring For My Halo a great deal to your liking. Rather than British punk or German opera, Vile purveys a guitar-laden sound, whether it’s pared-down acoustic or full electric, hallmarked by echoing sonorous vocals suggestive of one who’s already been places and done plenty. Ah, and for those who require the pedigree of a solid record label, this one’s coming to you courtesy of Matador.

Hailing from Philadelphia, Kurt Vile signed to the label as a solo artist in 2009 and put out Childish Prodigy to plenty of appreciative murmurings. This all came on the back of two earlier solo records and a stint with Americana outfit The War On Drugs. The admirably titled Smoke Ring For My Halo comes, then, as his fourth album and shows a maturity that ought to precipitate a rise in ranking beyond the mere promising. The record comes across as a very well thought out recording in both its detail and totality, as well as the way the artist knits contrasting influences together.

The songs divide into two broad camps. On the one hand, there are heavily atmospheric numbers like opener “Baby’s Arms” and the wistfully ironic “On Tour”; the other hand is composed of upbeat cruisers, of which “Jesus Fever” is probably the most immediate. That eerie opener, “Baby’s Arms”, charms with its swirling, looping guitars that weave in and out, ringing with sitar-like tones to match intoned mantras.

“Jesus Fever” quickly follows, showing that this album isn’t going to be straightforward, constant fare. The song soft-rocks along to chiming guitars and crisp percussion in a kind of reprise of 70’s radio-friendly rock, the kind you might roll along a West Coast highway to. It’s an insistent song freshened up with nice, unusual chord changes and sung in a lazy, welcoming drawl.

There are plenty of other high points along the way. The title track is a rhythmic quilt of sound textures built around a three-chord trick. It’s a song whose simplicity is deceptive and one that gets stronger with repeated plays. That comment applies to much of the material here, in fact. For instance, on first listen, the riff-heavy “Puppet To The Man” seems like a Stones filler with over-stylized vocals but later reveals a darker, more constructed side when you stick with it.

There are times that Kurt Vile’s rich baritone (Dylan meets Lou Reed somewhere in the country) gets a bit too down and gloomy, like on the folksy “Runner Ups” and to a lesser extent on “Society Is My Friend”, where the hypnotic rhythm tends to mask the vocal effect. Any doubts, though, are dispelled by a song like “Ghost Town”, which sees all the trademark Vile components working in harmony. It’s an intense builder with richly layered textures, yet the tension is relieved by a softer, stripped-down final verse. The supporting cast of musicians on the record, mostly picked from Vile’s typical backing band, The Violators, play impeccably throughout, with Mike Zanghi’s percussion a particular bright spot. Equally, the co-producer, John Agnello, brings a rich mix to the proceedings.

The unexpected twists in melody throughout the record nicely balance the more repetitive strains. The record, in fact, ends with an odd minute-long instrumental combining guitar and church bells played out like a short requiem. But that’s unlikely to be the last you hear of Kurt Vile.