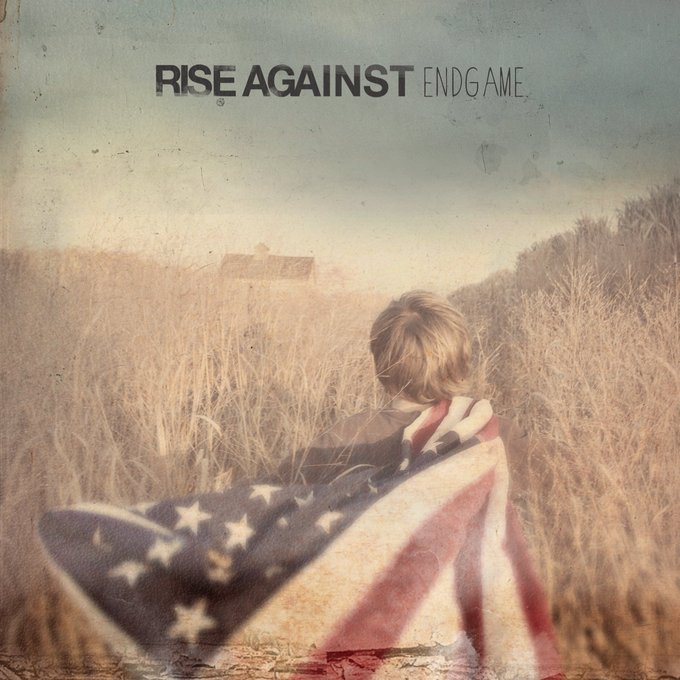 Rise Against has been a thriving force in Chicago-based punk rock for just over a decade. Well beyond their humble fast-paced Fat Wreck Chords beginnings and fresh off 2008’s chart-punching, heart-wrenching Appeal to Reason, this act knows how to market abrasive commentary circa-Revolutions Per Minute that never loses weight in the production values or melody. Endgame is inherently the follow-through of its predecessor, with additional flavors that may or may not help the cause lyrically prevalent.

On delivery, Rise Against takes a cue from The Offspring’s most recent effort and does it exponentially better: Rise and Fall tried to be deep in imagery, surrounded by perhaps only one or two truly sincere statements (“Shit Is Fucked Up”, “You’re Gonna Go Far, Kid”) and tons of radio-friendly filler; Rise Against’s haphazard moments deal tracks like “Satellite”, “Disparity By Design”, and initial “Chamber The Cartridge” rehash “Architects”, with a fist that poignantly inquires of what you would be willing to do against those who’ve trespassed upon your freedoms (while occasionally allowing the music to overpower the vox):

They laid out the blueprints,
They poured down a base
Concrete solutions to slow our decay.
But when they are gone
Who the fuck’s gonna take their place?

Yeah, will it be the cynic, the critics galore?
They say I’m pathetic, face down on the floor.
This trustee complacent we’ll collectively ignore.

Do you still believe in all the things that you stood by before?
Are you out there on the front lines, or at home keeping score?
Do you care to be the layer of the bricks that seal your fate?
Would you rather be the architect of what we might create?

Metal-geared “Midnight Hands” and tumultuous “Hero of War”-spawned “Survivor Guilt” provide the mid-section necessary to push on toward everything between “Broken Mirrors” ferocity and “Wait For Me” subtlety. Action envelops and destroys whatever weaker points were left uncovered via Appeal to Reason, crediting Rise Against as something of a missing link between Propaghandi-esque brutality and the easily consumed energy of something along NOFX lines (minus juvenile piss humor). Who says the straight-edged can’t get in one’s face once in a while?

The beauty of rock music in this vein is not a niche but a universal acceptance that swallows everything, while each individual tastes something exclusive to them. As obvious as Rise Against might be on the songwriting front, music like this bridges gaps between the straightedge dynamic, hardcore, and your everyday listener who seeks everything from a complex meaning to nothing more than steady rhythm for moshing.

While Endgame tends to soften its blows come “A Gentleman’s Coup” (if taking Rise Against’s earliest works into consideration), the title closer raises a bass bar without being as extraordinarily noticeable, particularly when compared to past conclusions like 2004’s “Rumors Of My Demise Have Been Greatly Exaggerated”. It’s a less appropriate finale to a CD that really ignites us at the kickoff, but all in all, no severe letdowns anywhere — the fitting continuance to Appeal and prior, and though not as discordant as DC punk, Rise Against sets out for a goal and succeeds in achieving it.

Bottom line? Rise Against set out to be for everyone, by everyone, without stripping from the beliefs and social concepts the band holds dear; Endgame boasts an upgrade of the streamlined aggression Appeal to Reason gave to its best ability and changes rhythms seamlessly from punk to metal to “Taps”-like drum intros behind the stark persona of a less-is-more artwork facet. Rise Against may never get as grimy and punked-out as the era of “Dead Ringer”, but this is not selling out; this is expanding the horizon to broaden who receives the calling.

If an sXe outfit can have a not-so drummer in the lineup without hostility, still batter the studio at full force, and come out swinging, there’s hope for everyone (except maybe Escape the Fate, if their egos have anything to say about it).