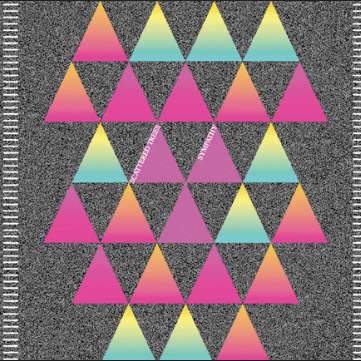 Creating music has served throughout the ages as a cathartic way to handle tragedy, therapeutic in the composition of chords and words. The relationship works inversely as well, though, as from the tragedy of death springs musical inspiration. Chicago sextet Scattered Trees, old friends reconnected through the horrors of death, and their debut Sympathy, strike an interesting balance between two, as their lyrics primarily deal with death and acceptance, but also carry with them a transcendent, compelling beauty that only post-tragedy growth and maturation could conjure. Sympathy draws its strength from its vocal fragility and sincerity, as well as its swelling melodies and delicate composition.

The album begins with “Bury the Floor”, whose ominous sustained tones and harmonized humming sound appropriately morbid and similar to a funeral dirge, introducing the primary theme of the album. The track also serves as an introduction to Nate Eiesland’s vocals, which undeniably end up being the rock of the album. As he delicately describes trying “to find ourselves by morning,” it is clear that emotions are awry at present, and the album will be spent trying to sort them out. The severity and near-hopelessness of the lyrics continue into the next song, which laments that “everybody’s falling apart,” expressing frustration with the inadequacies of language to effectively deal with the problems at hand with lines such as, “It’s two a.m. and my words are wearing thin.” Writing such as this is a constant throughout Sympathy, and although weighty, conveys honestly the perils of dealing with death.

The instrumentation on “Love and Leave”, track three, initiates an interesting dichotomy that pervades the majority of the album. Heavy, emotional lyrics are paired alongside surprisingly upbeat melodies, resulting in a mix that somewhat undermines the desolation of the words with hope, but is necessary to prevent Sympathy from becoming an entirely too depressing album. This goes back to the duality mentioned in the introduction: Scattered Trees is simultaneously dealing with death through music and drawing inspiration through it. Although effective, sometimes the juxtaposition seems too unnatural, notably in “Four Days Straight”. Upbeat handclapping accompanies “Oh no, we both have broken hearts/Oh no, yours just took you away,” almost disrespectful to the severity of death.

Otherwise, the composition of the band’s various instruments works well with the melancholic lyrics. The titular track “Sympathy” features Elliott Smith-esque vocals with a subdued atmospheric background and strumming mandolin, and strings that swell wonderfully with the chorus progression. The build works more effectively than the onslaught seen previously, as healing from trauma is not a polar process. This mediated journey forward is a much more accurate accompaniment to what Eiesland is doing vocally and is infinitely less jarring.

Sympathy is strangely powerful, though the instrumentation is nothing revolutionary and Eiesland’s vocals are not overly strong. Objectively looking at the album reveals nothing of true consequence, no earth-shattering aspects that will evoke long-term change. By the end of the album, it’s easy to grow tired of the interminable weight of the material. Catharsis cannot be completed if one continues to revel in mourning, but it is entirely feasible that Scattered Trees were not ready to be fully healed yet. Maybe that’s where the power lies, though, in the lack of compulsion to impress. The absolute sincerity, the difficultly in delivering certain lines – it’s real. Scattered Trees came together to make this album to cope, to remedy feelings the only way they knew how, and therein lies its effect and its beauty.