The Pains of Being Pure at Heart – Belong 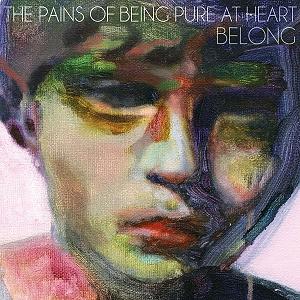 Very much to their own surprise and delight, The Pains of Being Pure at Heart were one of the biggest breakthrough bands of 2009. Their self-titled debut is a testimony to awkward adolescence, and in an Internet age where band names usually intertwine with the genres they associate with, theirs was spot-on: an emotional, melancholic entity focused on heartbreak and coming of age. With a devotion to capture that 80’s dream pop context, Pains were painstakingly indie, coming out on a label with a history as vital to the movement as Slumberland, and most likely to appeal to the hard-line indie kids in Brooklyn who were just as depressed and confused as they were.

The Pains of Being Pure at Heart is far from alternative rock; it’s a nostalgic album soaked in reverb and recorded with a drum machine rather than an actual drummer, reeking of that bedroom indie pop candescence. When the band announced that their sophomore full-length would be produced and mixed by two of the greatest 90’s rock icons, needless to say the entire hipster community was a tad bewildered. Supporters of the group would fear that gargantuan producers like Flood and Alan Moulder (PJ Harvey, Nine Inch Nails, Smashing Pumpkins) would alter the band’s aesthetic and result in a sound unlike the heart-soaked jangles that comprised their debut. Fear not, devoted fans, for Belong, though certainly louder and bolder than its predecessor, is still indubitably Pains, a natural progression that finds them continuing to ponder heartaches, dreams, and love affairs while displaying a confidence and maturity that hitherto did not seem possible.

Belong opens with the title track, a sure ode to Smashing Pumpkins circa Siamese Dream, frontman Kip Berman presenting themes of uncertainty and solitude as he did on the debut, but over noisier guitar riffs: “I know it is wrong, but we just don’t belong/In their eyes, in the sun, no we just don’t belong.” The track sets you up for the premise beset here; whereas, Pains of Being Pure at Heart was undoubtedly 80’s dream pop, Belong takes the best parts of that merged with a 90’s intricacy that screams alternative rock. Didn’t see that coming. The band’s coming-of-age motif and tales of perplexed teenage-hood continue to dwell. On “The Body”, Berman sings, “Tell me again what the body’s for/Cause I can’t feel it anymore/I want to hurt like it did before/We shouldn’t sin.”

Unlike their debut, the band had ample time to focus on songwriting and construction, experimenting with new repertoire during live performances, picking and choosing which songs captured what they were trying to achieve. It shows. Belong is not about Pains maturing into adulthood, nor do they desert their visions of startled innocence; the indie dream pop explication continues to play a very vital role here. The difference is the disparity between songs, the little, seemingly irrelevant sounds revisited anew. On their debut, the transitions between cuts were barely noticeable and at times, musically, it felt redundant. Belong forces you to notice, moving from the dangling indie pop of “My Terrible Friend” to a power jam like “Girls of 1000 Dreams”. Pains still cater to those indie kids in Brooklyn that fell in love with them back in 2007 when they released their self-titled EP, but certainly thanks to Flood and Alan Moulder’s involvement in shaping this record into something grander and livelier, their music reaches brand-new heights and can appeal to a much broader audience.

In a recent interview with Stereogum, Berman and Co. discussed Flood’s involvement and their aspirations for the new record. “We didn’t want him to make us sound like a ‘big’ rock band. We didn’t want to iron out all of our rough edges. In the end, he was really into the ways in which we are bad at playing music, and he kind of celebrated it. He wasn’t trying to make us U2. He just wanted to make us become a better version of ourselves — to get to the heart of what makes us good as a band. That was the coolest thing.” What’s striking about Belong is just that, how far away it is from their debut but how close and homogeneous it is all at once. They definitely sound like more of a band now, merging their despairing lyrics and indie pop demeanor with an alternative grunge that’s certainly worthy of praise, perhaps even more now than ever before.