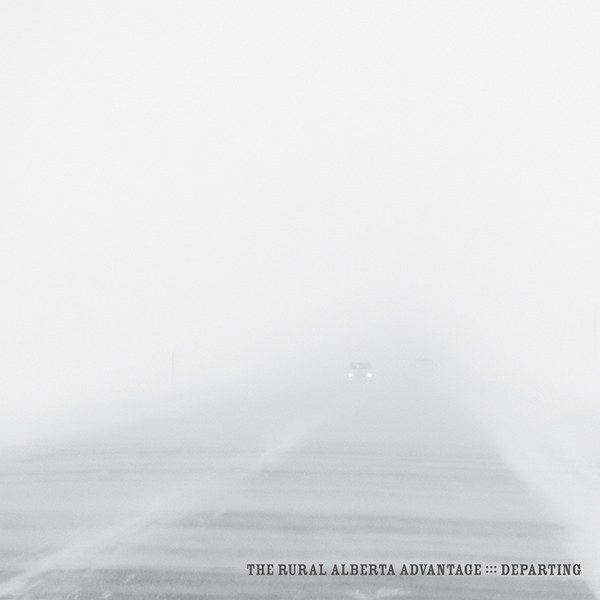 It seems like eons ago that I awarded The Rural Alberta Advantage‘s stunning debut, Hometowns, a CoS Top Star rating two summers back. The world was a different place then. For one, Jeff Mangum showed nearly no signs of resurrection. It was still a long-lost dream to catch Mangum popping his head out of the weirdo annex, and to even witness him sing into a microphone or strum a chord would be the equivalent of winning the indie lottery. At that point, the Neutral Milk Hotel frontman was still the stuff of legend, an amorphous spirit shoved into a box somewhere in Athens, Georgia, with “FRAGILE” stamped on its side.

Fast forward a bit, and somehow, someway, Mangum is back, or at least on his way there. In a few months, he’ll rip open the flaps for a tour, and those fortunate enough will get the chance to live the dream that used to be so long and so lost. And while the Aeroplane devotees rejoice and stock up on tissue boxes, something will happen to all those records indebted to Mangum’s snarled-out songcraft. Groups like the Decemberists and the Rural Alberta Advantage will no longer be lauded in the same way for their uncanny abilities to emulate Mangum. He’ll be reminding us of his haunting prowess himself. And though it’s a blessing for fanatics, Mangum’s resurgence will make us all realize that just about nobody does it as well as he does.

But obviously, these bands don’t merely mimic. We wouldn’t listen to them if they did (though, people do seem to like Muse). Folks are bound to draw influence from remarkable musicians. And while The Rural Alberta Advantage’s Departing holds on to those Mangumisms that made its debut so captivating, like Hometowns, this record has more going for it than its nods to the Two-Headed Boy. Again, it overflows with Paul Banwatt’s frenetic rhythms, Amy Cole’s “Autumn Sweater”-y synths, and Nils Edenloff’s knack for unrefined, catchy vocal melodies. However, that might not be enough this go-round. Where Edenloff’s naÃ¯vely heartbreaking storytelling really made the group’s debut into the triumph it was, his approach here may just be too naÃ¯ve for his own good. Edenloff’s lyrics are as barren as the wintery mess he attempts to conjure with them.

The short record (only 32 minutes) is a misguided exercise in lyrical repetition. It begins with the slow acoustic strums of “Two Lovers”. Pounding toms meet lingering piano keys as Edenloff sings an anatomic love song in the nasally, undulating high register that drives the comparisons to Mangum: “If I ever hold you again, I’ll hold you close enough to crush your veins,” he sings as cymbals crash. Though the imagery is bright and compelling at first, it’s a motif that appears far too often here. The song’s images (bones, veins, hearts, etc.) do little to argue against the Mangum influence but work as a thesis statement for the record’s untiring reiteration. Where Hometowns looked back on the experiences–good and bad–exhibited in places long left behind, Departing is utterly lovelorn. Relationships continually deteriorate as Edenloff howls and claws for a resolution far out of reach. The problem here, however, is that he’s clawing with the same motions each time.

Take “Under the Knife”, one of the set’s most intriguing tracks. Sure, it carries with it those isolated, yet incessant, snare-hi-hat patterns that wowed on Hometowns. And, it’s still hard not to compare Banwatt’s style to The National’s Bryan Devendorff.  His peppery rhythms cut into the track, and sprinkled with scaling keys, the song is The RAA at its instrumental and melodic best. But even so, it’s only the third track, and it feels like we’ve already heard these lyrics a bunch of times. “Tear us apart tonight” and “Our love has grown cold and I’m holding you close tonight,” sound like carbon copies of the record’s predecessors, with only a few minor adjustments made.

The subsequent tracks don’t seem to let up, either. The electrified “Muscle Relaxants” again boasts Edenloff’s infatuation with holding people tight, hearts, and the like. “North Star” sits under a night sky whose North Star leads somebody back to…you guessed it, “my heart.” It all sounds beautiful, but the game of hearts and arms grows tiresome quickly. “Stamp” again mutters about love occurring in cities during the month of winter. “Hold me close if you can,” he yells. Then the dramatic buildup of “Our love’s waiting tonight.” Edenloff and Amy Cole harmonize beautifully, but we’ve heard this all before. These three individuals have gorgeous aesthetic chemistry, but you can’t help but grow a little exhausted by these rather simplistic lyrical musings. Clearly cognizant of this repetition, Edenloff and Co. may have missed the mark with their exercise in lyrical cyclicism, repeating words and phrases so often that they really do lose their meanings by the record’s end.

Still, some moments work better than others. The anthemic “The Break-Up” brings us back to the wintery themes found on Hometowns. Snow-covered cities, cracks in the ice, lines incised in the snow with boots, and The Rockies paint a chilly picture of a relationship on the verge of collapse. Staccatto keys bounce around coolly echoing harmonies and whirring synth. They all build beautifully into a blossoming chorus whose synthesizers assume a size far greater than their wiring would suggest. As the chorus hits, Banwatt’s drums crash and burn into a slow metallic wash before returning to their precise, hasty selves. Even in the summer, “We’ll be waiting for the ice,” cries Edenloff. In not such a different manner from Okkervil River’s “Okkervil River Song”, the track dissects the relationship between people and the places and environments in which we grow to love them. It’s variation, albeit minor.

If Departing is a concept album, then its concept is all too unsophisticated. Perhaps that’s the point, but that might make matters even worse. While Jeff Mangum (now seems like a good time to bring him back into this) sang a whole lot about notches in spines, blankets, sheets, flowers in eyes, and wings on Aeroplane, he had enough additional kernels of genius to warrant the occasional repetition. These were songs whose repetitive elements connected the nearly entirely shrouded dots; they weren’t the dots themselves. Here, the repetition is about all that exists, and it doesn’t work out as well as the group may have intended. Jeff Mangum isn’t the easiest guy to go up against in the songwriting realm, but when you sound an awful lot like somebody, comparisons are inevitable. Especially when that person is upping his relevance by the week.

Departing loses a great deal of what made its predecessor so rewarding. It’s got the music down pat, but a skeleton doesn’t make a person. While a surface-level listen to these songs is satisfying, they won’t hold up for too long. Not with Mangum back in town, either.