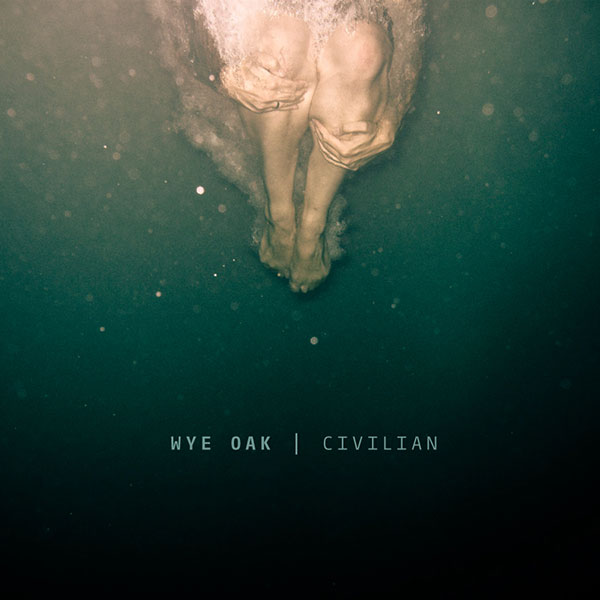 Controversial novelist Bret Easton Ellis recently stated that in his work, “plots don’t really matter,” admiring the existentialist detective fiction of Raymond Chandler due to the value of an enthralling “journey, tone, and style” over logistical details or narrative intent. The same could be said about Civilian, the latest album from Baltimore indie duo Wye Oak, in which their usual walls of distortion and intense builds are further abandoned for evocative sonic dream-scapes, a trend they began to explore on 2009’s The Knot. This isn’t to say the album isn’t catchy (it is) or without premeditated momentum (it’s not), but the often gorgeous songs eschew the band’s well-chronicled loud soft dynamics and structure in favor of establishing a mood, then leaving the listener to revel in the ethereal environment.

Take opener “Two Small Deaths”.  The song commences with ambient bar murmurs before quietly introducing Andy Stack’s crystalline keyboards and hushed drumming. Jenn Wasner chimes in with the woozy morphine slur of her wounded vocals and things continue to subtly stack from there.  There are choruses, yes, but they’re so seamlessly weaved into the verses that you’re bound to miss them.

The same principle applies to the lyrics, the sometimes haunting words of vague suburban confinement slipping into ears nearly undetected. This works in Wasner’s favor when it comes to her more melodramatic musings. While a great deal of her imagery is concrete and hard-hitting, she often teeters on the side of melodrama. Phrases such as “I am nothing without my pretend” don’t hold much weight in spite all of their cumbersome intent, and it’s best that they’re left buried amongst the spectral sonic majesty.

All of this spackled sonic blending is a far cry from the jarring calm-to-clattering shifts of the band’s earlier work, and this is both a blessing and a curse. “Holy Holy”, plodding rocker “Dog Eyes”, and the folk-tinged title track are the most successful songs, punching up all the twinkling introversion with muddy guitars and vocal variations that are neither hidden nor abrupt. Whereas the band’s earlier rapid switching of gears could be off-putting, here they use it sparingly and to great effect, at least for the first half of the record.

However, by the album’s close, it’s been so long since we’ve heard any sort of sonic jump that we end up longing for it. The majestic meditation is breathtaking during the midsection mini-suite of “Fish” and “Plains”, but wears a little thin by the final two tracks, “We Were Wealth” and “Doubt”. While they sure are purdy, what was once a soothing lull is rendered into a numbing drone. The quiet, equally mixed instrumentation doesn’t help, either. Still, Wye Oak should be highly commended for expanding their already strong sound. Let’s just hope they leave in a tad more of their younger selves next time around.