Another Round: Dirty Projectors – "Stillness is the Move" 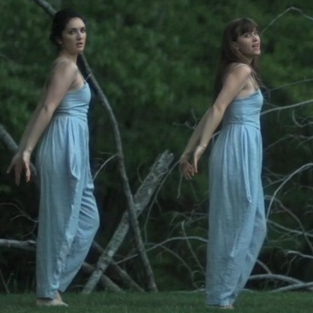 Thanks (?) to the Internet, it’s now eminently possible to have nostalgia for two years ago. Turning on the “way back machine” and setting it to distant, archaic 2009 would find the Dirty Projectors releasing Bitte Orca, which we called the 14th-best album of the year. It turned out that we weren’t the only ones who loved it; instead, that was just another accolade added to a huge pile that saw them jump from Don Henley-referencing operatics (The Getty Address) and Black Flag re-orchestrating (Rise Above) into the higher echelons of indie prominence. That moment in time in which the Projectors grew from minor scene-stealer to a vibrant, esoteric force to be reckoned with was exciting, as is any time when a deserving band gets their day in the sun. As such, we recall the triumphant, yet tenderly unique video for the standout track from that album, the indie rock R&B anthem “Stillness is the Move”.

While founding member/frontman Dave Longstreth has a long history of overhauling instrumentation and genre details from album to album, “Stillness” had almost seemed unrelated to anything but itself; the slow-grooving drums, lilting, overhanging guitar, and bubble-bursting bass of the song’s beginning sound like they could’ve been pulled off a pop radio station rather than a Dirty Projectors record. Singer Amber Coffman’s vocals dominate the song, though. Aching and soaring, the lyrics spin with a sort of vague hopefulness in the middle of the confusing, modern world.

Director Matthew Lessner took the lyrics about urban scenes (“maybe i will get a job, get a job as a waitress”) and transplanted them into a woodland scene, Longstreth carrying around a 12-string guitar as he leads his llamas through the forest while he spins a turntable. A close-up shot of a be-scarved Coffman singing directly at the camera is eventually followed by siberian huskies, coordinated dance moves, and a pastoral llama hug. Connecting to “the world before the world” fits the Dirty Projectors, and the image of Coffman and vocalists Haley Dekle and Angel Deradoorian running through the dusky forests, huskies on leash in the lead, is at once wild and triumphant.