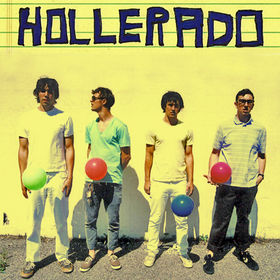 Gilles Leblanc, a longtime CoS reader and author of the ROCKthusiast, has plenty to say about Canada’s latest export…

There arent many certainties in this day and age, but I know one for sure as it relates to rock music: If you get a chance to see Hollerado in concert, there is absolutely no way you cant have fun. Im talking fun with a capital F-Uoh yeah, cant forget the N!

Whether its their irresistibly catchy lyrics, their playful power chords, their relentless confetti shooting, or just the fact that theyre four funny, down-to-earth dudes from Manotick, Ontario, its pretty much impossible not to fall in love with Hollerado once youre exposed to them.

Whats more, they are easily one of the hardest-working bands in Canada (or anywhere else for that matter), having toured almost nonstop since self-releasing their Ziploc-sealed debut album, Record in a Bag, in 2009. (How many other bands can say theyve played in China multiple times?)

2011 is going to be another busy year for Hollerado, and they were in great spirits prior to a warm-up show at a bar in Barrie, Ontario, called Kenzington. I started by asking the guys to comment on the news from the day before, which was still on music fans lips:  the breakup of The White Stripes. Smart move, Jack White, vocalist/guitarist Menno Versteeg said candidly. You cant get any bigger as The White Stripes until you break up. Theyre as big as they can get with being a band, so its time to break up; hes still going to do other awesome stuff, then 6-7-8 years from now, they can get bigger than theyve ever been. Hes a genius. (My personal over/under is five years for a classic Coachella Festival reunion, as bassist Dean Baxter put it.)

Hollerado got a pretty big break in June of 2009 when Jack White handpicked them to open for The Dead Weather at a last-minute show in Toronto. Despite this, they havent had any contact with him since. None whatsoever, not even in the back after that showalthough there is that one restraining order, they joked. If anyone reading this ever goes down to Third Man Records in Nashville, Tennessee, to buy a few hundred dollars worth of Jack White vinyl, Hollerado would like you to pass a message on to him: If hes not super busy, I guess we could use a third guitarist.

I learned about Jack and Meg White parting ways on Twitter, so I thought Id inquire about @hollerado. Drummer Jake Boyd admitted to tweeting the most on behalf of the band, depending on our sobriety levels. But social networking isnt at the core of Hollerados plans for world domination. Our strategy is to have the most fun at whatever we do. And what you see whenever Hollerado is onstage, four lifelong friends having the time of their lives, is pretty much what you get whether theyre online, being interviewed at the back of an empty bar in Barrie, or if they get to be the first band in space. No ones got the kind of leads I do! Dean bragged.

I wanted to find out more about their newest release, Margaritaville 2: The Reckoning, available here from Arts & Crafts on vinyl or as a digital download. Three of the songs were recorded during the Record in a Bag session, Menno clarified. So that theyre like B-sides, I guess, from thatdidnt make the record. One track they all agreed was extremely fun, “Canadianarama”, was a live recording; we didnt do that one in the studio. We did it outside the studio in a hallway just like a jam session, and it came across really cool.

One song newbie Hollerado concertgoers are likely to hear is Queen-like tribute Good Day at the Races, but the bulk of their setlist still features tried and true favorites such as Americanarama, Juliette, Got to Lose, and Fake Drugs, all from Record in a Bag. We just like to play the songs, they responded when I pried if there was a particular reason for going on tour again. Not really promoting anything; it would be great if people buy some music, but just trying to put on like the best show we can. Dean concurred, adding, Yeah, its not about the record, its just about travelling. Jake joined the conversation with, I mean its promoting the band, but its not even promoting the band, its justhaving fun.

At this point, even if we were right at the back of the bar, we were overwhelmed by opening band Indian Handcrafts incredibly loud soundcheck. I cant get mad at them, because they were really good in a Wolfmother-ish type way. (Check out their MySpace page , as I have a feeling well be hearing more from this duo soon, maybe even by me!) In between song previews, I was able to make out that Hollerado will be going to Amsterdam sometime this summerfor their sake, I sure hope that they serve nachos there!

Yes, you heard me right, nachos. The boys in Hollerado are so obsessed with them that they included a close-up of tortilla chips buried under a mountain of salsa, guacamole, and melted cheese on the cover of their new LP. When asked what would happen if the band found out somewhere they were playing didnt have nachos, Menno coolly explained, We have a policy for thiswe dont make a big dealwe politely leave, we walk out the front door, and when were about 40 feet away one of us runs up and throws a Molotov cocktail through the window. Nixon jestingly cautioned, We dont take it too seriously, but we like to send a message.

Let this be a warning to concert promoters looking to book Hollerado in the near future! These four hungry young men are on the cusp of a musical breakout, especially now that theyve been nominated for a Juno Award for New Canadian Group of the Year. Were so excited, Nixon gushed. Maybe Neil Young is going to be there, and that would be amazing. Not as amazing as Hollerados cover of Rockin in the Free World, the best version Ive heard by a band not named Pearl Jam.

Heading to Austin, TX for SXSW? Be sure to see Hollerado when they perform at Axis of Audios fiesta on Saturday, March 19th at The Rumbler Lounge. RSVP here!