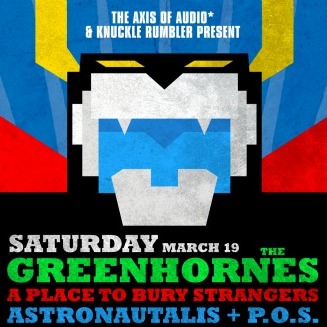 Yesterday, The Axis of Audio, which includes Consequence of Sound, Antiquiet, Some Kind of Awesome, Rock It Out! Blog, and Twenty Four Bit, alongside Knuckle Rumbler, made SXSW history by debuting what will no doubt remain an annual tradition. Set at the The Rumbler Lounge, aka Peckerheads on 6th, the incredible inaugural lineup featured unique and stellar performances by each act on the bill.

From Hollerado’s Menno Versteeg setting up shop in the middle of the audience to Le Butcherettes’ Teri Gender Bender nearly getting her head cut off, things got, well, crazy. Each set carried its share of, for lack of a more popular word, “swag.” What’s more, audiences were also treated to a rare performance by P.O.S. & Astronautalis, aka Four Fists, which actually marked the duo’s second performance to date. (Their first performance was on Wednesday at the Flamingo.) Die-hard fans might have noticed an odd member with Jukebox the Ghost. Yes, the band picked up a recent trumpet player, adding a unique vibe to their already full sound.

Given these sets were some of the band’s last for the week, it became quite apparent that plenty of artists just needed to cut loose before they, um, cut loose. Because of this there were good vibes all around. Artists partying, fans partying – ain’t nothin’ wrong with that, right? Austin, we’ll see you again next year.

If you didn’t make it, however, check out the photos below courtesy of Cap Blackard. Stay tuned for our mini-documentary of the event, which will premiere via Cluster 1.