Interview: Sergio Vega (of the Deftones) 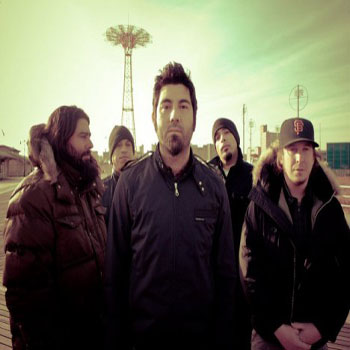 Being in a band is a bit like running your own business and being in a polygamous relationship all at the same time. Not only do you have to weather economic ups and downs, shifts in popular trends, and advances in technology, but you also have to do so while maintaining a relationship with several people, keeping everyone happy, involved, and on the level. Its little wonder that few bands make it through a couple of records without fizzling out or imploding.

For those reasons alone, it is remarkable that a band like the Deftones have not only been able to navigate the ordinarily treacherous waters of the music industry–rising from Nu Metal beginnings and creating their own recognizable sound–but have done so while handling personal setbacks and tragedy. For awhile there, lead singer Chino Moreno dealt with drug problems, then bassist Chi Cheng was involved in a car accident that left him in a coma that he still hasnt recovered from. Despite the challenges, the Deftones plowed forward, and their sixth album, last year’s Diamond Eyes, received acclaim from both fans and critics last year.

Consequence of Sound had the opportunity to chat with Deftones bassist Sergio Vega, catching him on a rare break between returning from a slew of shows in southeast Asia and heading off to play Lollapalooza Chile.

One of the testaments to the bands staying power is their adaption to new technology. In Vegas case, he is a firm believer of staying connected to the fans in a very hang out level, as evidenced by his presence on Twitter and on Facebook.

For me, I do it because it’s like a natural progression from when I was in the hardcore scene, he notes, and I like that side, going downtown and seeing a bunch of people outside of a park or in front of the venue, and it’s kind of like a meeting place for a certain, specific aesthetic. And now what’s cool about today is that you don’t need to have that physical proximity. People who like similar things can reach out and especially for smaller worlds and sensibilities. I like to have that exchange, and you know, I respond to people, so as long as it’s more like hanging out and not Oh, what bass strings do you use?

The band recently played in Jakarta, Indonesia, an event that was brought together by the fans themselves on various social media networks.

They had been campaigning for about a year online to get us there. They were all up on our Facebook and Twitter: Come to Indonesia. At first we were like, Yeah, OK, but once it became an actual viable thing that we got to go, then it was amazing. But we had a little bit of insight into how excited people were about it because of social networking and stuff, which really is cool.

They are still winning over new fans, too. The successful Black Diamond Skye tour with Alice in Chains and Mastodon took the Deftones all over the country like a mini-metal festival, giving them the opportunity to not only be heard by people who may not have listened to the band before (or caught their dynamic live show) but also a chance to be with bands who share a similar approach to music.

Vega says, What was cool about being on a tour like that was just that you feel you’re with down-to-earth people, and what I liked about the bill was that it was three bands who were rock bands, but they each had their own specific take, and each band marches to the beat of their own drum. They aren’t so concerned about checking out what’s going on with the rest of the world and that their cuts are right in time. It was nice to see that, to see three bands doing that on that level in the way that’s about creating and connecting with people, just because they enjoy the art. And to me, that type of tour speaks to the thing that I find most important: I don’t think the type of music you make is specifically what matters; it’s what you do and why you do things. What I thought was cool about that tour was that the principle just came across. All these bands were just kind of mellow and cool. Anybody at any of those venues had a really good chance at just seeing any of these people floating around and hanging out, and I think that that came across, as opposed to certain bills that are based on musical factors (these bands sound really good together)…I’d rather it be based on people’s personalities and people’s approach to their exchanges with the world.

Their next touring partner is Dillinger Escape Plan, another band known for their insane live shows and ridiculous amount of energy. Having personally caught the Deftones live in 1996 and 2010, I had to ask Vega how the band has been able to keep their shows so enthusiastic and unpredictable.

I guess it’s just a genuine excitement, really. It’s not about putting on a show. It’s just a natural reaction. We are just, like, happy. Not like with everything in life, but we are so appreciative of the things that have happened for us, and we’re grateful to be doing this, and it’s also the best thing to be doing in terms of honoring Chi and everything. You know people go out of their way to check you out and see you play and are excited to see us. We don’t take it for granted. You put on things, people get psyched, and then you get psyched. It’s what reminds me of why I got into music to begin with.

The frantic stage dynamics of Moreno also tend to bring out the phenomenon of his pants slowly slipping down during the set.

Vega laughs at that. We’ve both had our bums come out on occasion.

The band wanted to make a sick-ass record with Diamond Eyes, and they more than succeeded. It landed on Best of 2010 lists (including CoSs) and debuted at #6 on the Billboard Charts. For Vega, the reception was a nice surprise, but what really meant something was how the album was able to strike a chord with people, the same chord and intent the band had while making it.

[Making the album] we all had that attitude of we’re here, we’re going to be present, we’re very fortunate to have our health and to be able to play, and there’s people that dig us, and all of these factors brought us into making that record with just this glow. And when we put out the record and people started using the same terminology that we were using while making it, we thought wow. I mean, for me, speaking personally, this is the first time I’ve been part of something where people are describing it with the same terms that we are using, and we were able to get it all across, that same kind of energy and that same kind of excitement and level of intensity and buoyancymost people gravitate towards the band’s first things. But to have that kind of cool energy with the sixth album and really seventh because you know there is Eros, and it was just a special thing that is not lost on us.

Eros is, of course, the album that was going to be released in 2008 but was shelved indefinitely out of respect for Cheng. (His accident happened before it was to be released.) Fans wonder if the album will ever see the light of day, but Vega tells me its just a matter of timing.

It’s waiting for the right moment, he says. I think right now it’s unfairly attached to the incident with Chi. It’s just circumstantial. It’s not about that. I think that when there is a time where it can be seen as a piece for itself, then it will make more sense to put it out. And even better yet, if there’s a chance that Chi could somehow be a part of it in some capacity at all, that would just be 100 times better.

In the meantime, support for Cheng comes in through the website www.oneloveforchi.com (which was started by a fan to keep people updated on his condition) and recently through guitarist Stephen Carpenter’s Sol Invicto project, which has released official remixes of “Diamond Eyes” and Youve Seen the Butcher, with all proceeds going to Cheng.

It’s kind of cool in all consideration and in all purposes, because he’s still in the band, says Vega. I mean, he’s still alive, he’s just…out. And we never internally refer to him as not being in the band. It was really cool when we were making Diamond Eyes that Chi would keep coming up and stuff. His presence was so much a part of the record. We’d be hanging out, and they’d be talking about their life, and it would always be like, Oh, Chi did this, and then we all did this and always in the coolest way. It speaks of their character that they were able to handle that while embracing me, while talking about Chi, making a new record and doing all these things in a really cool way.

Though the band is still busy touring on behalf of Diamond Eyes, they are also releasing a vinyl album aptly entitled Covers for Record Store Day. (Vegas favorite cover is their take on Japans Ghosts.) And hopefully, somewhere along the line, theyll start working on a new album. Though they dont really write on the road, the creative wheels are always turning.

What we’ve been doing is almost like leading up to writing, says Vega. Sometimes when we are soundchecking we’ll start fooling around as opposed to playing songs. It’s kind of like that. It’s starting to creep in where a couple of times we’ve all come together and jammed on something. But it hasn’t been on that level where we have to remember it. I think when Diamond Eyes came together it was all that stuff that was written in the moment, of the moment. We share each other’s ideas all the time, like a few of us have mobile studios, so we do email each other ideas.

Finally, I have to ask Vega what he thinks is the secret to the Deftones’ longevity and constant presence in the music scene.

I feel like certain bands, after a while, kind of start reflecting on themselves too much where they’re just like, Oh, we’re great and here it is, and after they lose their sense of it,” Vega starts. “They start calculating how much they have to make to catch up, and then they start doing drastic sound changes that don’t seem like it’s coming from the heart. What I like about this group is that every day they are finding new music and buying records, and they’re still just fans of music and new experiences. And this is constantly washing through them. They have this need for excitement, and it’s kind of like they all, and myself included, share this quality of just wanting a feel of something fresh and something cool and new. We have these huge appetites for bands and checking them out and running around and turning that into input. We haven’t cut ourselves off and made a wall around our aesthetic. We wake up. We have fun. I really like chasing that feeling. If it feels good, then you don’t need to think about it.