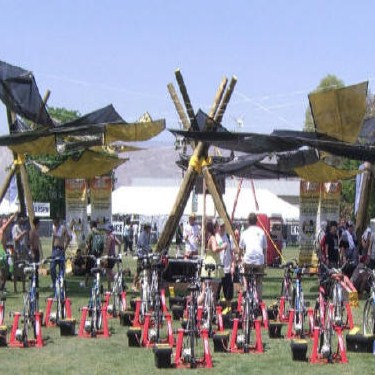 The time was bound to come when one could play an electric guitar without relying on those pesky wires. For now, one still must rely on a human being to generate that electricity, but it’s a start. Inventor Sean Stevens, according to wbur.org, has found a way to power a live show without plugging in — all a band needs is five buddies pedaling their asses off on stationary bikes, and voila.

Stevens calls it Sustainable Sound, a “clean” audio and lighting system which requires no more than the power of bicycles to get the job done. Boston band Melodeego has performed live using the system, and continues to do so.

During a demo for wbur.org, Stevens explained how it’s done: “There’s one bench that has three bikes mounted to it, and three people sit on it and pedal. Then there’s two individual benches that each have one pedaling station on it, and that will be wired into a central box that manages and stores the power and things like that.”

There are small generators attached to each bike frame. Stevens continued: “Instead of the back wheel you have one of these generators, and it’s like a hybrid car has electric motors and if you use them to slow down they generate electricity, which you can then use later.”

Stevens said an average person can sustain 100 watts comfortably, while five is enough for a small live show. A few months back, Melodeego was able to persuade a promoter in Somerville, Massachusetts to book the band using Sustainable Sound, and it was a success. The band now plans to tour this spring with Stevens on a 10-bike setup, a mobile system paid for by $14,000 in donated funds.

Stevens has showed off the system at Burning Man and other festivals, and has also used it in the middle of a Vermont forest. Yeah, that’s about as green as it gets.

And now, what we’re all thinking: Radiohead is sure to capitalize on this technology for the next tour. It’s coming, people.